A Look Inside a Portland Food Cart 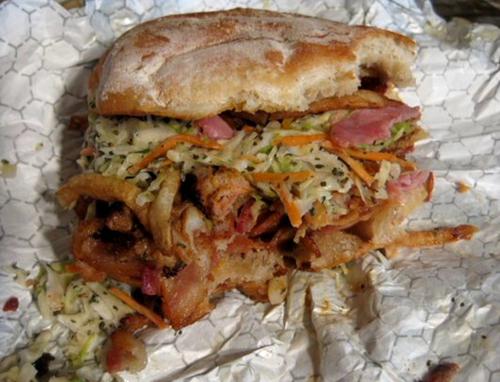 I interviewed Brian and Lisa Wood, the proud owners of a new food cart in Portland called Big Ass Sandwiches. I was curious to know how two people suddenly decide to stop what they are doing and make the leap into the Portland food cart scene.

Okay, so who’s crazy idea was this?

Well, kind of both of us. We really wanted to open a pub, but even with stellar credit, no bank was loaning anything and it put it so far out of reach. So we started thinking about what a step towards that could be. I (Lisa) thought it would be awesome to open a food cart, seeing as the culture has started evolving into something so great. Brian was hesitant at first, but warmed up and eventually came to love the idea.

Previously, to Big Ass Sandwiches, what were you both doing?

I (Lisa) spent about 10 years in the music and radio industries. While I loved it, 2 layoffs in 2 years was enough to make me re-think things. Brian, having tired of working for not-so-great restaurant owners moved into a maintenance job at Nordstrom to take a break. After the 2nd layoff we decided it was time to work for ourselves.

What is a Big Ass Sandwich?

The $5 sandwich is a quarter pound of homemade roast beef, turkey, ham or vegetarian Field Roast slices and a half pound of home made fries. We then give you the option to add homemade béchamel cheese sauce, grilled mushrooms, onions, peppers, horse radish, jalapenos, coleslaw, Secret Aardvark hot sauce or bacon. It’s really up to you to make it what you love.

Brian, I know you have an extensive cooking background in a variety of restaurants, and even ran your own ship; what was it like to build your own cart with your wife Lisa from scratch?

It was incredible. We got to build the entire concept together, which was a lot of fun and once we nailed down the concept of what we wanted, the building of the trailer was very linear. We knew what we needed to execute what we had planned, so it gave us the ability to fine tune our game before we even started playing.

Was there a moment when you were building your cart when you stood back and thought, “What have we done?”

Yea, that happened a lot. Not even so much over the fact that it was a food cart, but over the fact that we were putting everything we had into a business which was up in the air if it would succeed or not. There just comes a point where you plan and plan and plan and you have to finally jump in and hope for the best. We wanted it badly enough that we just had to have faith that people would dig it.

As a couple, how has it impacted your life? Why do you think you two are the type of people who are meant for this?

We think that we’re the type of people who’re meant for this because we are smart, strong willed, hard workers who not only want to succeed personally, but who want to see good things happen to the community and people around us. With a combo of Brian’s 10+ years as a Chef and my (Lisa) 10+ years in media/marketing, we thought we had a perfect balance to get it done.

Okay- who came up with the name?

Also a joint effort. We wanted very much to have something unique, something that wasn’t being done already. In the many brainstorms and discussions, once we settled on the sandwich, we agreed it had to be huge. Somewhere in there “it needs to be a big-ass sandwich” was uttered and that pretty much sealed it. 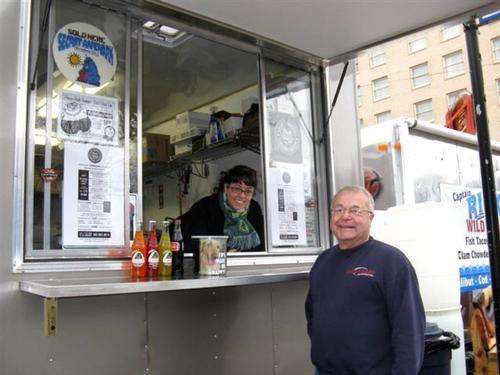 Hours and location? Where can we find you on a given day?

We are on the corner of SW 3rd and Ash Street, downtown by Kells, The Ash Street Saloon and Voodoo Doughnuts. Right now it’s just the 2 of us and we’re open 10am-3pm Monday through Thursday, 11am-3pm Fridays and Thursday, Friday, Saturday late night from about 11pm – Late (1amish on Thurs, 3amish on Fri/Sat).

Hugely. Honestly, we were both a bit skeptical about social media in general, but for a business, we’re now singing it’s praises. There’s no way we would have been able to reach the amount of people we have, without it. It’s also been a great way to share the ride of getting a business open and the ups and downs of it all. People seemed to really enjoy that.

Lisa, from your history at KEXP you already have a huge fan base- do you think that has made an impact on your business from the get go?

There’s no denying that over the last decade I’ve met a ton of people in a wide array of pockets of the community and I think that has been beneficial for us. We try so hard to be good people, good to our community and we think the connections we’ve made over the years with the same kind of people have really come through for us in getting the word out. We also have some AMAZING friends who have helped us greatly. Rachel Moss did our website pro-bono, Killorn (killorn.com) has done all of our design, logos, etc., Jeff Chiquette printed up our menus, Falco is a man of so many trades, he’s been invaluable from hauling to welding to building, Rick Emerson, Cort & Fatboy, Byron Beck, PDX Sucks and Funemployment Radio all gave us media love & Samantha at Media Maison is a PR genius who’s been great to us. OK this sounds like a freakin’ awards speech, but really, we couldn’t have done it without them.

Have you two always been into big ass sandwiches- what food are you both in to?

We definitely both love a great sandwich. There are so many amazing spots in Portland for sandwiches, we feel really lucky to be a part of it now. We are total foodies, if it’s good, we will try it and PDX is bursting with delicious restaurants and food carts. Some of our favorites are 3 Doors Down, Iorio, Nick’s Coney Island, Wild Abandon, Whiffies, Yarp, Potato Champion, Brunch Box, Rick’s Wild Seafood, DC Vegetarian and Locos Locos.

I know you have only been open a short amount of time, (when was your first day?) Do you already have a following?

Our first day was December 21, 2009. We have seen a very humbling amount of people become regulars in that span of time and we couldn’t be happier. Great people & such fun to serve them. It’s pretty amazing to see so many of our sandwiches sent out on Twitter and Facebook. It’s a food town, so many cartivores and we love it.

Who is likely to show up at your window?

Anybody who loves a sandwich. We see the college crowd, the Monday through Friday office crowd, bartenders, moms with kids and of course the late night drunk and hungry crowd who’re just happy to have something in their stomachs.

What are the top three things that got you into starting Big Ass Sandwiches?

Portland is a huge foodie town, you’ve got a pretty tough crowd. What does Portland think of Big Ass Sandwiches?

So far, so good. The response has been fantastic, people are coming back, coming because their friends told them to or because they read about us online. We know that we will never please everyone, but we are very happy to see the sandwiches being embraced by so many, so far. 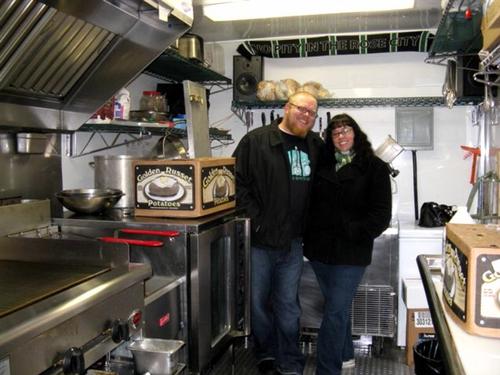 How is Big Ass Sandwiches different from other street carts out there?

We don’t know if we’re much different from the other street carts out there. Part of what’s so amazing about the Portland food cart culture is having such a great array of carts to choose from, all with killer food. Aside from the obvious, which is that we put fries on the sandwich, we’re just a couple of people who have the same goal as the others…feed Portland great food for not a lot of money.

Wow...we will have to make another trip up to Portland to get one of these!

There are no two more amazing people in this world than Brian and Lisa. These sandwiches needed to only be 10% as great as they are to be worth eating.

Very cool post. It's always interesting to learn about the backgrounds and motivation of people who start food carts. I will check them out next time I'm in Portland - I like their name!

wasn't "Pork Hammer" a Tad album? seriously, these kids can cook, and they're charming as hell. cheers to Brian &amp; Lisa!

Ooooh - I can't wait to check this place out - looks amazing! I am in support of any food on wheels. Good luck to Brian &amp; Lisa.

I agree, I wish Seattle had more food carts- I'm jealous! Next time I'm down there- it's going to be just food carts for me.

BEST. SANDWICHES. EVER. And the folks running the place are stellar!!! SO SO SO SO--sososososo soooo Good.

p.s.Cheese sauce is a must!

Sick and tired of obtaining low numbers of useless visitors to your website? Well i wish to inform you of a brand new underground tactic that produces myself $900 each day on 100% AUTOPILOT. I possibly could be here all day and going into detail but why dont you just check their site out? There is really a great video that explains everything. So if your serious about making effortless cash this is the website for you. <a href="http://autotraffic-avalanche.net" rel="nofollow">Auto Traffic Avalanche</a>