If you drive four hours north from Seattle, you can catch a ferry boat to what many call paradise, The Sunshine Coast. The coast boasts countless fjords (inlets) found on this peninsula northwest of Vancouver, B.C. Fjords are narrow inlets from a body of water (usually the ocean) that carve cliffs and/or steep slopes as they move inland. The largest one on the Sunshine Coast is the Jervis Inlet which is 55 miles long (89 km) and starts at the Strait of Georgia.

While enjoying the ferry ride and discussing our plans, I noticed someone had a t-shirt that said: "This Is Not an Island." This is to clarify that the Sunshine Coast is a peninsula and not an island, but you cannot drive here. However, it is nice to take your car on the ferry.

During our 40-minute ferry ride, we answered many pressing questions like, why is this called the Sunshine Coast? The name, according to local folklore, was coined by Harry Roberts of Roberts Creek. Mr. Roberts liked bragging to his friends at nearby Gibsons about how dry the Roberts Creek area is, and he even painted a sign that said, "Sunshine Belt." Then real estate folks liked that name and claimed that the entire peninsula is the Sunshine Coast. One final nugget of important information is that Roberts Creek gets 0.75 inches (19 mm) less rainfall than Gibsons.

Want a meteorological fact? On an average summer day, Gibsons has a high of 70 F (21 C) and only two cloudy days during a typical summer month. Incidentally, while I was there for three days, there were 37 hours of daylight, and all 37 were hours of sunshine. No rain, or as locals would say, "liquid sunshine." 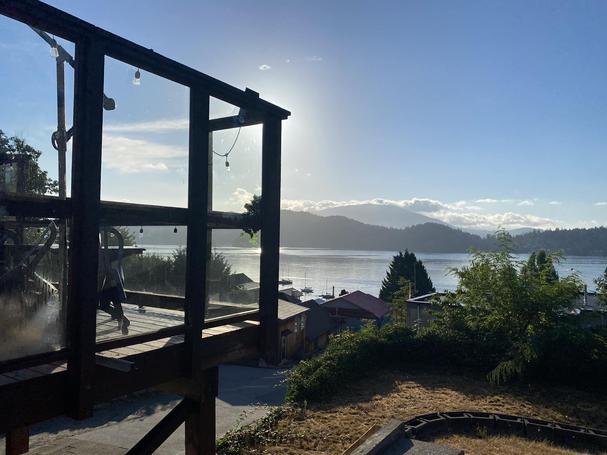 Upon landing in Langdale, we drove the short distance to what has been claimed as "The Most Livable Community in the World" - Gibsons. This proclamation was made in 2009, and we assumed this still holds true. Our first stop was at the Drift Cafe & Bistro BC. We enjoyed some refreshing beverages, and several in our group enjoyed a local beer from Persephone Brewing Company. They also have a small farm and are growing barley that will be used in their beer. I enjoyed a British Columbia Rose from Evolve (Penticton, BC) that I found very refreshing. For lunch, I had the Ahi Tuna Poke Bowl. This dish came alive with a unique blend of Avo puree, pickled ginger, and pickled onion finally topped with zesty citrus-based classic Japanese condiment ponzu sauce. Very impressive. A popular item for the others in our group was waffles and bacon. 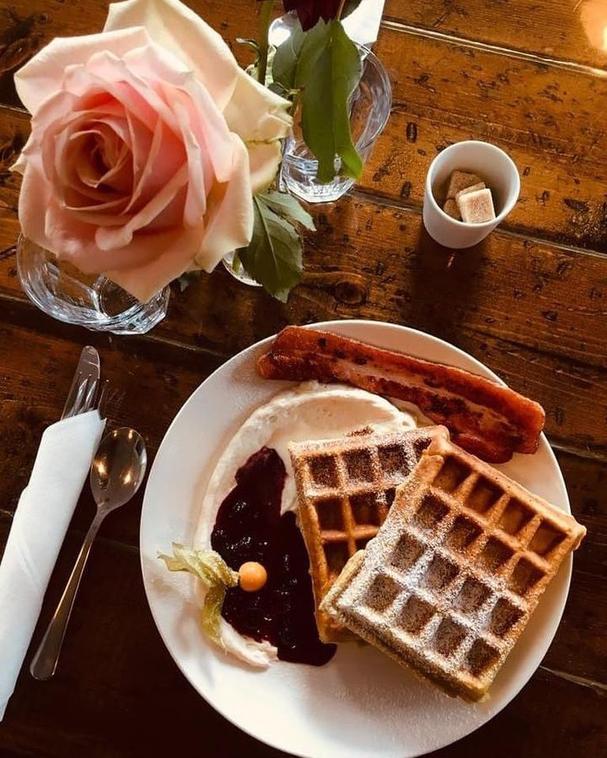 Before leaving, I talked with the chef and owner, Tim Bedford. He received his culinary training and work experience in Vancouver, BC. Tim spent summers on the Sunshine Coast and fell in love with the area, so it was an easy decision to move his family to Gibsons. Now Tim and his wife Stephanie run two restaurants. So on a typical morning, Tim is cooking breakfasts at Molly's Reach Restaurant, and when done, he takes the two-minute walk to his other restaurant to work on brunch and then dinner. Tim also finds time to share his culinary secrets at Vancouver Community College as Culinary Instructor.

I would be remiss if I did not mention what many Canadians (baby boomers and their offspring ) know that Molly's Reach was the location for filming the T.V. series Beachcombers (1972 to 1990.). Maybe I will need to check that out.

Before returning to the main road, check out some of the beaches just south of the Bistro, like Secret Beach Park or Bonniebrook Beach. After soaking up the ocean views, we enjoyed the pleasant 25 minutes on the Sunshine Coast Highway. The first part of the drive was through the forest, and then the road returned to the sea at Davis Bay. We noticed folks lined up outside the very popular restaurant/ café Gourmet Girl Cafe and Catering. So on our return, we will grab a table outside and enjoy the view of Davis Bay and out towards the Strait of Georgia.

We continued to the shíshálh Nation tems swiya Museum. Words cannot describe the history of this first nation. We spent an hour with the curator Raquel Joe, who shared stories and some of the artifacts; some are estimated to be over 3500 years old. The most fascinating ones were "Grieving Mother", a mortuary commemorating the wife of a chief who drowned herself when their only son was killed. Very sad and compelling. Make sure you stop here.

We thanked Raquel, and our next stop was something entirely different; a 50-minute seaplane ride over the Sechelt Inland. However, this also included an audio describing the indigenous people who inhabited the lands over 10,000 years ago. Talaysay Land, Sea & Air Tour – Sunshine Coast Air. It was fascinating to listen to the narration that included drumming and song. 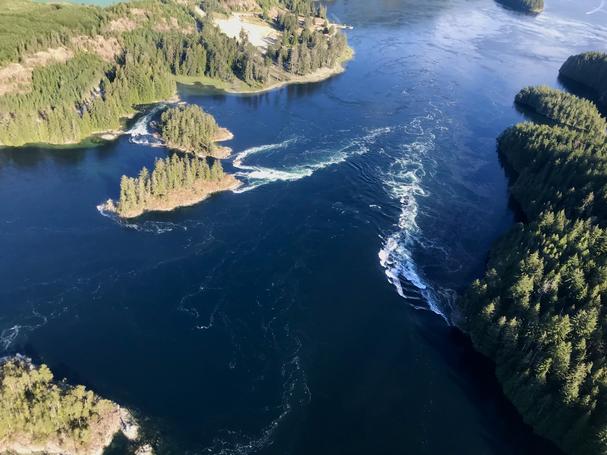 After this tour, we landed at Egmont Adventure Centre, which is adjacent to West Coast Wilderness Lodge; wonderful lodging we enjoyed for the next several days.

West Coast Wilderness Lodge; Much More Than the View

The lodge is located in the small village of Egmont, at the crossroads of four major waterways: Sechelt Inlet, Jervis Inlet, Hotham Sound, and Agamemnon Channel. It was easy to know what our focus would be for the next several days. 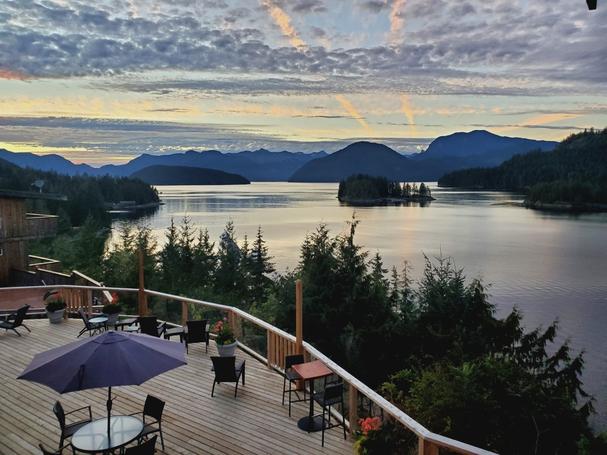 Before any water activities, we were ready for dinner with a view overlooking the Skookumchuck Narrow. It was hard to focus on ordering dinner while sitting outside, taking in the breathtaking views. However, once we started being served dinner, the fine cuisine became one of the most memorable parts of the day. 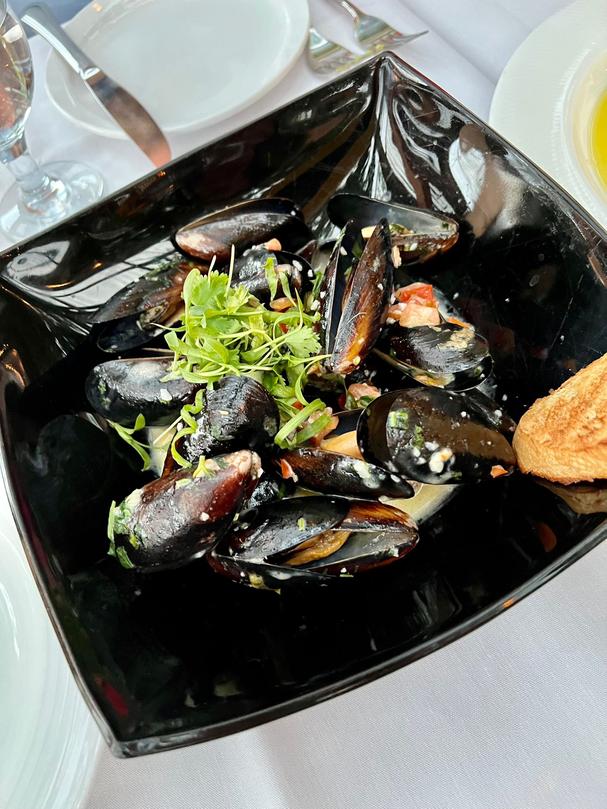 The first food sampled was the juicy P.E.I. Mussels (Atlantic) with white wine sauce. Interestingly, this was a shared meal for our group of seven, and somehow I was able to enjoy most of the mussels served to us. We continued looking at the menu, and the chefs joined us; Warren Cobb and Steve Bannochie. Warren has been the chef for 15 years and Steve for five years. These guys do an outstanding job, and I will briefly highlight some of the delights. The best and most creative dish was the Wild Sockeye Salmon Wellington. Done in the traditional Wellington style, the salmon, with rock crab and shrimp was wrapped in a soft puffy pastry. Of course, one cannot forget dessert. 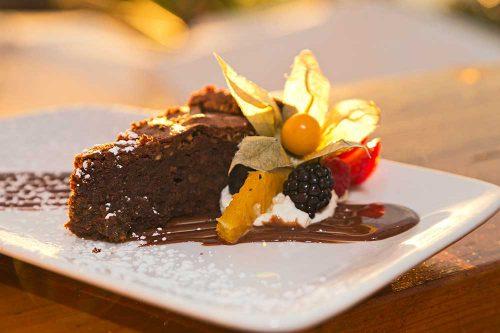 From the light Blueberry Cheesecake Tort to the, perhaps not as light, chocolate cake we really enjoyed dessert! 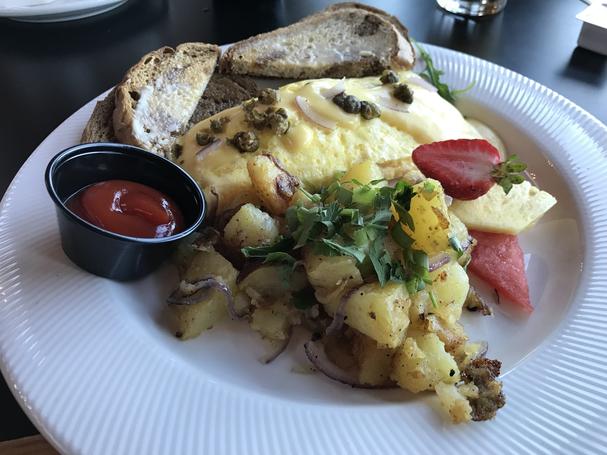 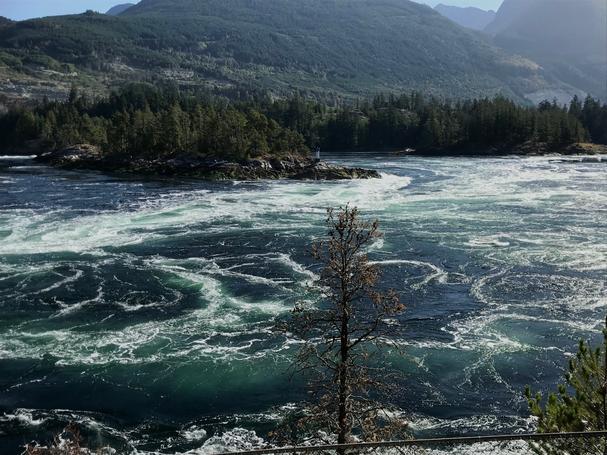 I needed to do more than eat, so the first activity was taking a short hike of 2.5 miles (4 km) one way to see the Sechelt Rapids. These rapids are funneled through a very narrow passage where two inlets meet, Jervis Inlet and Sechelt Inlets. The net result is that massive amounts tidal waters are exchanged twice a day during high and low tides. During the low tide, big whirlpools are formed, and the tidal current can be up to 20 mph (32 km/hr.) That would certainly register as one of the stronger tidal currents. 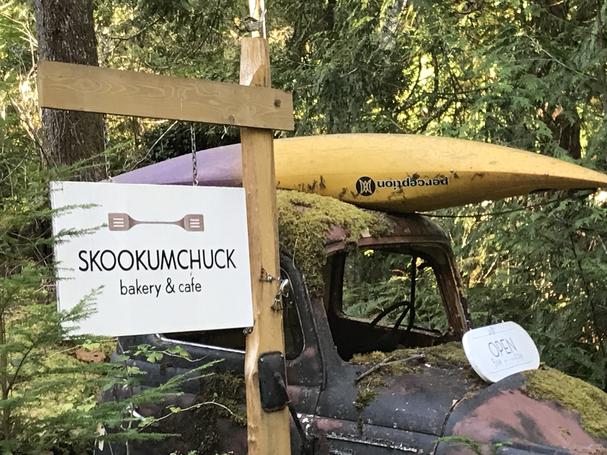 After a very relaxing hour listening to the current, we headed back to the car while making another food detour to Skookumchuck Bakery & café. How convenient this is, literally several yards off the trail, to enjoy pastries and sandwiches.

Burning off Calories Round 2- Night Kayaking and Bioluminescence

Our group returned to the lodge, and some of my friends worked, but I had better things to do, power—lounge. I just sat on the patio chair and enjoyed the view. After several hours it was time to head down to the water for our evening kayak. However, this was going to be a long evening, so we enjoyed some food at The Backeddy Pub, which is adjacent to their Backeddy Resort and Marina. Chef Mike Denomey and his team outdid themselves for us. 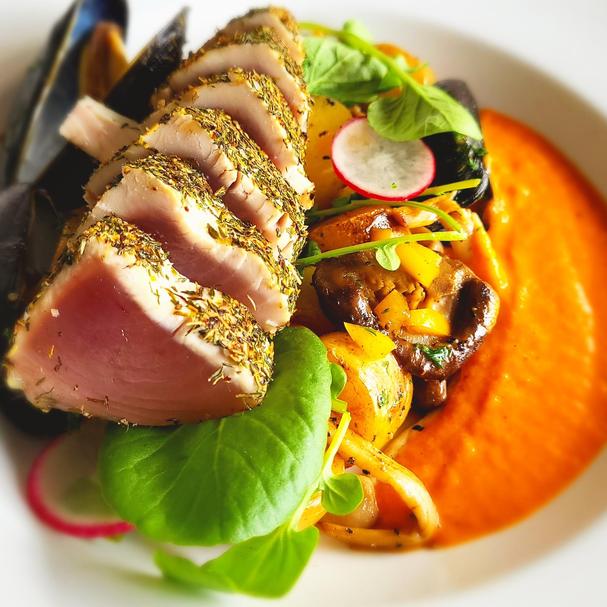 Mike got his culinary degree in Ontario, then headed west and spent many years honing his skills at Whistler Ski Resort. Looking for a smaller setting, he started working here in 2018. We decided to share our selections and ordered almost everything on the menu, such as traditional poutine and beer-brined chicken wings (what made these special was the hot Sambal Honey Garlic). I thought that was the best, but Mike brought out his special for the day: Scallop Ceviche, served in lettuce cups with the scallops marinated in lemon juice with cumberers, tomato, avocado, jalapeno, and cilantro. Oh, that was special! Last but not least was the Steelhead Tacos with guacamole and pineapple salsa. The steelhead was local from the Sunshine Coast, Powell River.

Now we're finally ready for our evening guided kayaking with Metta Eco Experiences . Our guides for the evening were Greg and his partner Meriel. Greg began his guiding career when he was 16 as a canoe guide. He has since become a certified sailor, pilot, skipper, and sea/whitewater kayaker. Meriel brings vast sailing and other marine experiences. Thus, we were in great hands with these pros.

Ready, set, go? Not so fast. Since we were going to be in the Skookumchuck Narrow (NOT THE RAPIDS) for several hours, they needed to be meticulous in giving us the necessary training and safety rules. 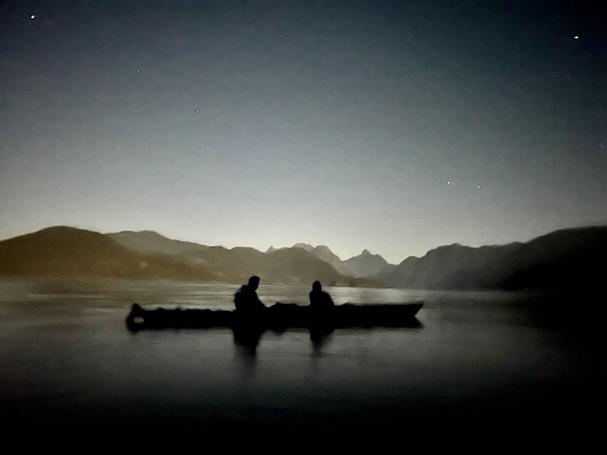 Part of the training explained that bioluminescence is simply the biochemical light given off by living organisms like plankton. The most fascinating part is when you put your paddle in the water, you see streaks of light. The best time to do this is when it is dark with little or no moonlight. Even though this evening had plenty of moonlight, our guides took us to many small dark coves. We did some cove hopping for several hours, enjoying the sparkles of bioluminescence. What a surreal experience! It was getting late and time to return to our home port. We went from calm wind conditions to paddling into a stiff headwind which thankfully awoke our inner strength, and we got an excellent workout.

After our late-night kayak, we settled into bed close to midnight, and we sadly knew our fun three days were about to end. Also sad was that we needed to get up early; thus, we needed to pack before going to bed. Believe it or not, I haven't covered everything we did, so I will follow up on our other excursions later. One thing I know: everything you want to do is right here at West Coast Wilderness Lodge. They run so many water adventures through their sister company Egmont Adventure Centre Kayaking & Adventures in B.C. Trust me, you will not regret any of these fun adventures.

Please the Eye and Tempt the Palate:...
Nancy Stuckwisch