Vancouver, Washington: Wining and Dining Along the Columbia River 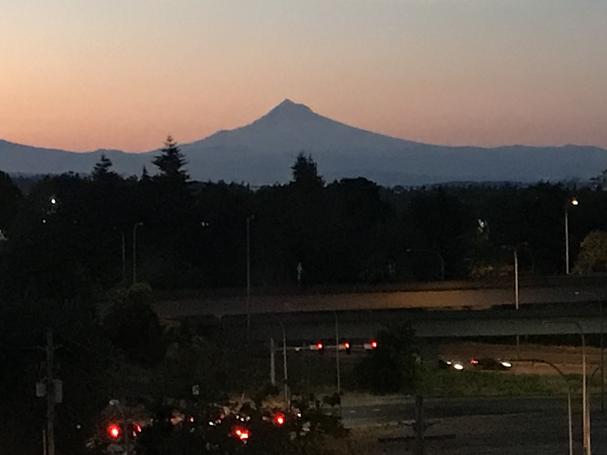 We were awed by the view of Mt. Hood every morning from our hotel room at sunrise. Along with that inspiring view, billows of smoke came from an eatery just across the street. After watching the smoker get fired up from our hotel window every morning, we finally decided to try The Smokin’ Oak Pit for a very happy Happy Hour. 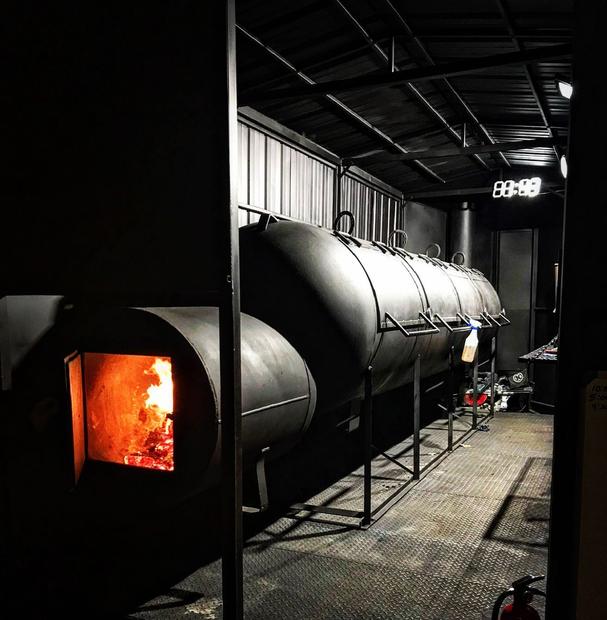 The restaurant is tucked away off the street – follow the signs or follow your nose, as the aroma is delicious! Inside was relaxed and homey, with an open kitchen design to keep things interesting. The smoker is a 22-foot offset barrel smoker. They use 100% Oregon White Oak; no charcoal, gas, electric, or shortcuts! Along with a couple of delicious cold beers, Michael and I had the Brisky Sliders – smoked brisket prepared with oatmeal stout, garlic aioli, and caramelized onions – and the Brisket Birria Tacos – served with house consommé. Both dishes were wonderful; the meat was so tender it could be cut with a spoon. 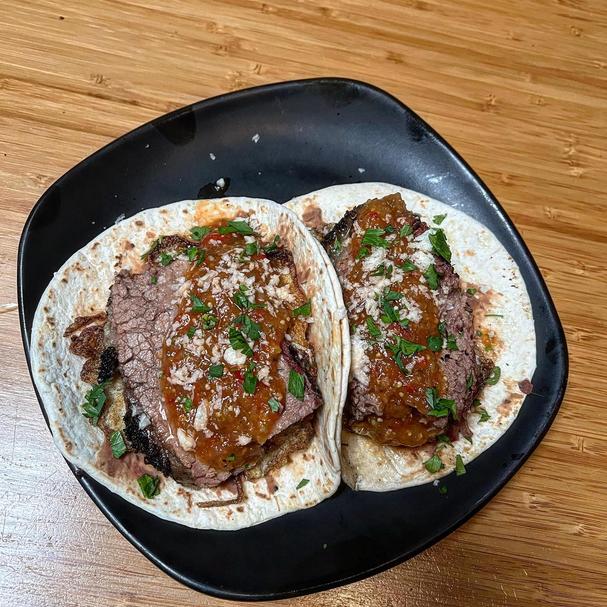 All of their recipes are based on family recipes dating back four generations in central and eastern Texas. We would have been happy to eat all of our meals at The Smokin’ Oak, but we had places to go and other food to try.

Our next culinary adventure was at the Waterfront Taphouse, which is located on the second floor overlooking the Grant Street Pier along the Columbia River. There’s plenty of seating inside and out with beautiful views of the river and pier. 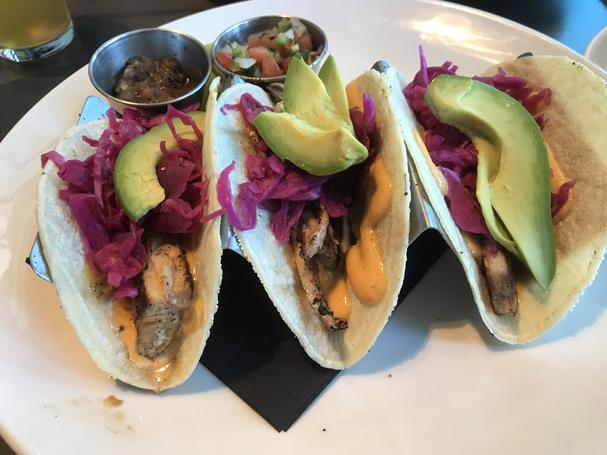 I ordered the French Dip sandwich, which was very tender, thinly sliced beef with Swiss cheese and caramelized onions. It was served with both au jus and a delicious horseradish sauce. I’ve had a few French Dips in my life, and this was one of the best! Michael went with the Fish Tacos- made with Mahi Mahi prepared with pickled cabbage, a nice portion of avocadoes, and red salsa with a real kick. We were both very happy with our meals! 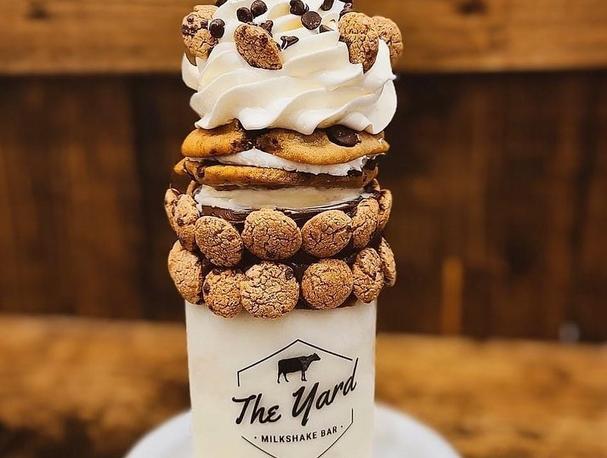 After dinner, we took a pleasant stroll along Waterfront Park to check out all the wonderful restaurants, tap rooms, and wine-tasting rooms along the way. We thought we were just “window shopping,” but when we got to The Yard Milkshake Bar our ice-cream cravings took over. It was fun to watch them make their signature giant, milkshakes and sundaes. The toppings on each just towered over the ice cream! If you order one of their giant milkshakes, it comes in a souvenir mason jar – something to take home with you. Michael and I were not equipped to take on a whole tower of ice cream and toppings, so we had just a small bowl of ice cream. Michael had the Banana Pudding, and I had Praline Pecan – both delicious and creamy. A perfect final touch to the day!

The next day included wine tasting along the waterfront, and we uncovered an interesting fact. Fort Vancouver, Washington is the location of the first planting of wine grapes in Washington State. Waterfront Park in downtown Vancouver is home to at least six tasting rooms within a few blocks. There were a couple we skipped because we had visited them at their wineries: Brian Carter Cellars has excellent wine, as does Barnard Griffin Winery. But for now, we were looking for something new. 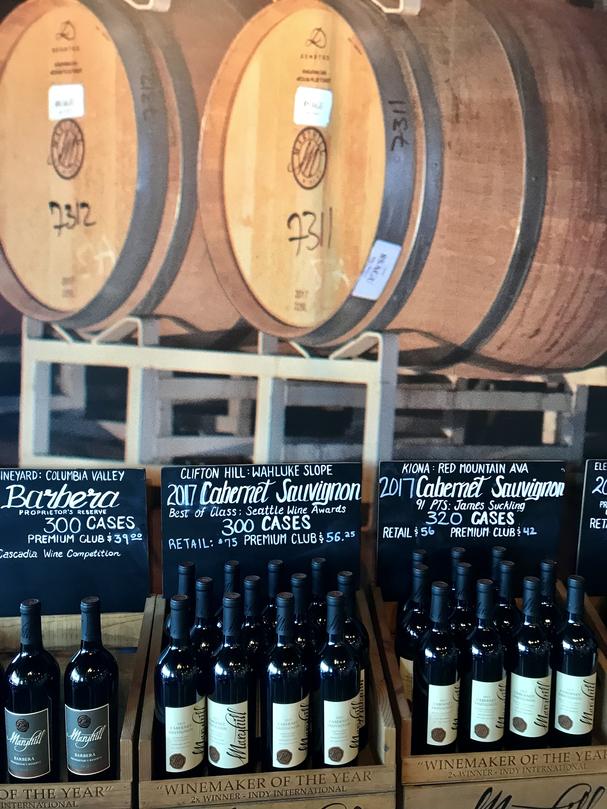 We found our way to Maryhill Winery tasting room, a great venue with lots of seating both inside and outside along the riverfront, along with live music entertainment. 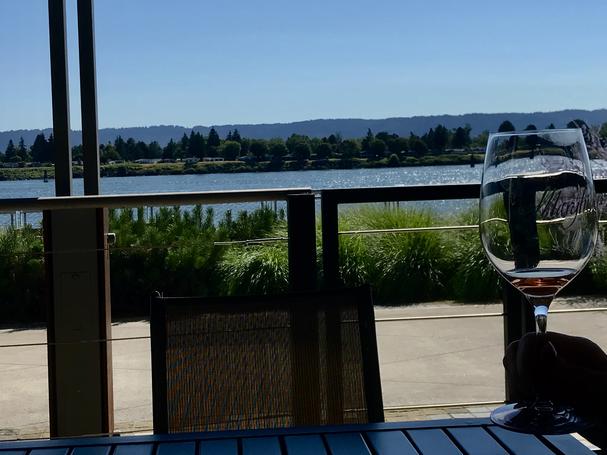 Maryhill’s flagship winery is located in the Columbia Gorge, about 100 miles east of Vancouver in Goldendale. Some of the highlights of our tasting experience were the Syrah, the Viognier, and the Albariño. The Syrah was a medium to full-bodied wine with notes of plum, berries, and cocoa powder. It was delicious. Viognier is one of my favorite whites, and this one was not a disappointment. The nose had a delightful touch of grapefruit and was crisp and refreshing. Our favorite for this experience, though, was the Albariño. This grape originates in Portugal but is mainly grown in Spain now. This light-bodied white wine had a nose that brought to mind a creamsicle. But – it’s not a sweet wine; its nice minerality balances the taste notes of citrus and melons. 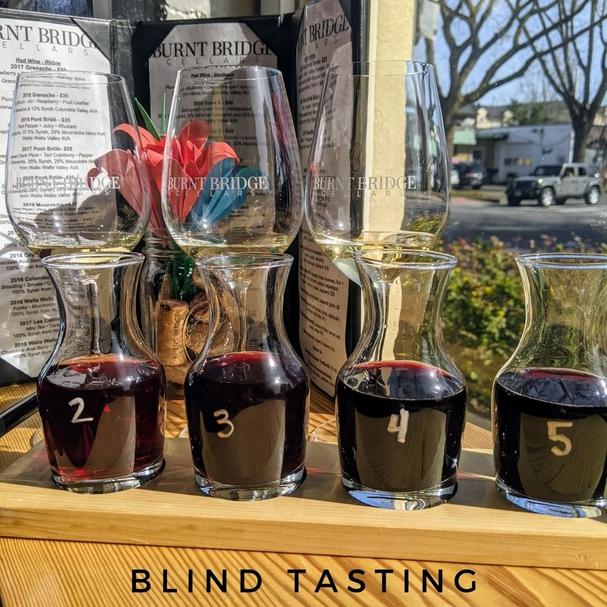 Next on the list was Burnt Bridge Cellars. Their tasting room is just north of downtown Vancouver, just a 15-minute walk from the hotel. They are the only winery located within the city limits of Vancouver. Their grapes are sourced from Eastern WA and then turned into wine in their converted 30’s era auto garage. Part of the conversion includes some lovely outside, covered seating, and sometimes features live entertainment. Co-owners Mark Mahan and Greg Wallace take considerable (and well-earned) pride in their small-batch winery. The grapes are sourced from vineyards with whom they have well-established relationships. Everything, right down to the barrel making, is done by hand.

A favorite wine was the 2019 Vantuscan – a “super Tuscan” wine named after the city of Vancouver and made with a blend of 40% Sangiovese, 15% Merlot, 15% Cab Sauv, 14% Malbec, and 8% Cab Franc. Tastes of black fruit and cranberries enhance the soft tannins and floral notes. We also enjoyed the 2019 Malbec, aged for 22 months in French Oak and has tastes of plums, berries, and a touch of sweet tobacco.

They are often asked about their name; was there really a burnt bridge in their story? The name comes from a creek that runs behind one of the owner’s homes: the Burnt Bridge Creek. But follow that thread, and you will find that the creek used to be called Bridge Creek, at least until the bridge over the creek burned down. Today there is also the Burnt Bridge Creek Trail. This 8-mile, paved, multi-use trail is a beautiful walk (or bike ride) through the scenic Burnt Bridge Creek Greenway.

You can find lots more information about wine in and around Vancouver by checking out the Clark County Wine Trail. 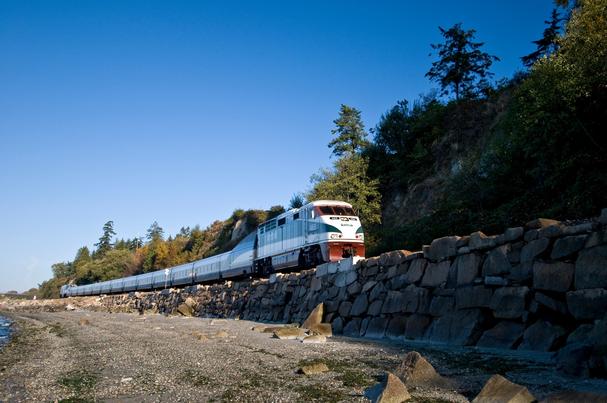 Our entire trip was done by leaving our car at home. Easy to do by staying in downtown Vancouver which is a short walk to everything we enjoyed. One of the best parts was the Amtrak Cascades train ride. It was powered by the most energy-efficient locomotives and had a smooth ride, even at 80 mph at times. We arrived in Seattle slightly more than three hours, with no traffic to deal with on the rails in Tacoma. This relaxing ride was paired with some microbeers: an IPA from Seattle, and a hefeweizen from Portland. We’re sold on this way of traveling, so our next trip to Salem, Oregon will definitely be by train.