Olympia, Washington: Kayaking and Biking to Beer and Fresh Seafood 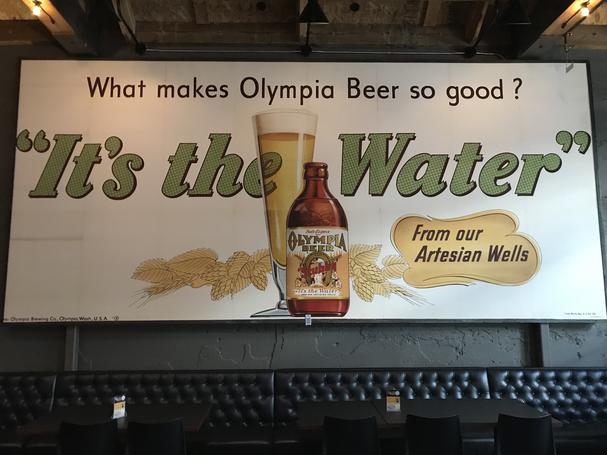 Beer and the Water

Frank Kenney takes all the credit. In 1902 Frank was secretary of Olympia Brewing Company and told co-owner and founder Leopold Schmidt that "It's the Water" should be the catchphrase for their beer. However, Leopold disagreed, and the final answer took some heated discussions and a cooling-off period. Frank prevailed.

Why the water? Since water is the main ingredient for beer, they located the brewery adjacent to the Tumwater Deschutes River. Also, let us not forget there are 26 artesian wells, making it a choice spot located in the South Puget Sound.

Let us backfill the history of Olympia Brewing Co., co-owner and brewer Leopold Schmidt. He started brewing in Montana but wanted to hone his skills further and returned to his homeland of Germany and attended the world's only brewing academy. He received his Master Brewer's Certificate, met Johanna, and got married. Having accomplished what he intended to do and more, the couple returned to Montana.

While in Montana, Leopold also found time to get involved in politics and had the assignment to visit different west coast capitols for design ideas for the new Montana capitol building project. While visiting Olympia, Washington, Leopold and his brother noticed a factory in nearby Tumwater, located along the Deschutes River, had artesian wells. As a bonus, Tumwater Falls also provided power. Thus Leopold and his bother Louis purchased this choice property. 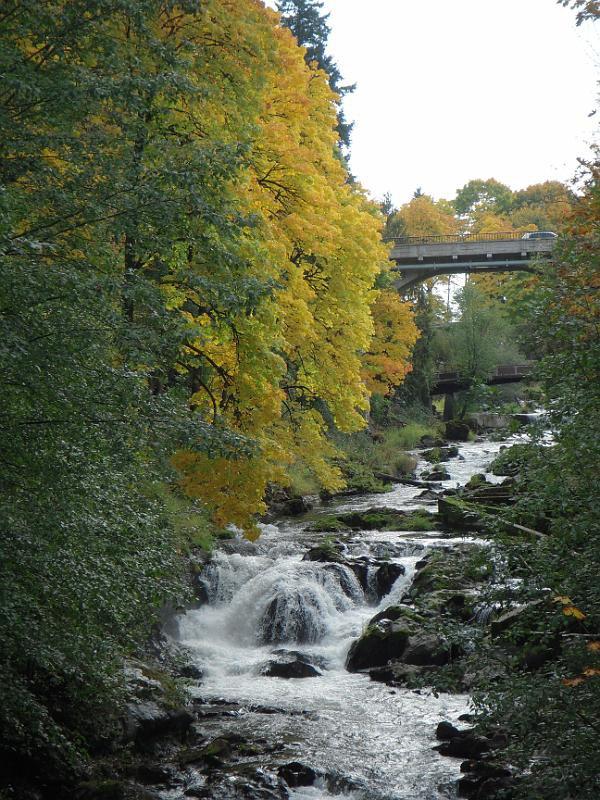 1896 Capital Brewing Company was formed and later named Olympia Brewing Co. Through the years, the company won many awards and continued brewing here (except during prohibition) until the brewery closed in 2003. All this history lives on through the foundation located at the Schmidt House. Be sure you visit the rose gardens adjacent to the house. Five minutes from this is Brewery Park at Tumwater Falls. Enjoy the waterfalls and view of the old brewery on this 30-minute walk.

How about those artesian wells? These wells generally do not require a pump as the water is brought to the surface by pressure. These waters travel many miles for a long time and are filtered by the rocks. Some folks claim that the water is over 3,000 years old. Leopold thought that the pure artesian water would make a great lager. 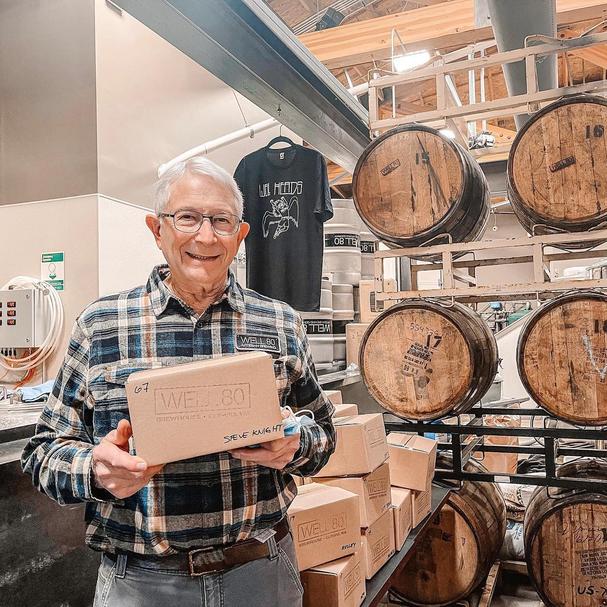 After a busy morning, it was time for some beer and food at Well 80 Artesian Brewing. Why Well 80? A survey listed Well #80 as the well located on their property. Many of the other wells (just under 100 wells) are now capped.

Not only is Well 80 fortunate to have water freely flowing on their property, but they also have the connection to Olympia Brewing, Paul Knight.  Paul was their brewmaster from 1961 to 1997 and now, at the age of 88, has come out of retirement to help craft his recipes with Well 80 head brewer Paul Pearson. They worked on four beers, and I enjoyed two of them: Original Lager Year and Leopold's Original 1896 Lager. I enjoyed both of them, but I will not commit to which was my favorite. Although the Leopold's has a slightly lighter taste and a little higher in alcohol. Elizabeth enjoyed the dry and hoppy Artesian IPA.

While enjoying the beer, some great food arrived. I had the Grilled Chicken Caesar, and tender chicken was a hit. A bigger hit was the oven-baked tomatoes. Elizbeth enjoyed her Black and Bleu Burger, made with a prime chuck and short rib blend and finished with bleu cheese, grilled onions, lettuce, tomato, and House Blue Cheese Sauce. 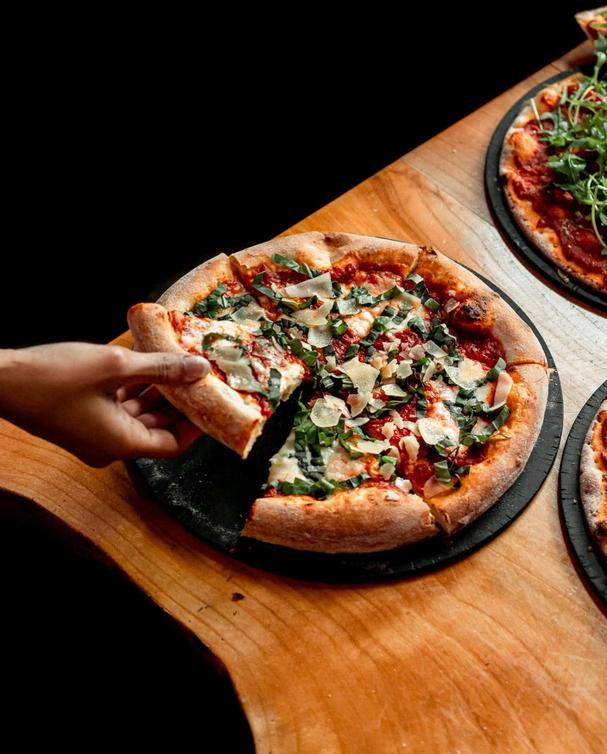 We were finishing lunch and Chris Kundson joined us. Chris's brother Evan and dad Bob are all involved with the family business. Chris has lots of restaurant experience while helping dad at his Olympia-based Casa Mia Italian restaurant. Chris did mention that next time we come here we should try their pizza since the dough comes from Casa Maia. We thanked Chris for his time and headed out to our next destination: Puget Sound. 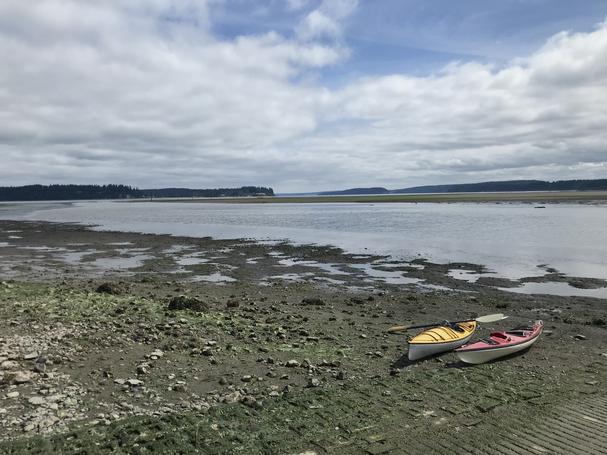 Which one should we paddle? Boston Harbor, Budd Inlet, Nisqually Reach, or West Bay. We decided to visit these locations and then make a final decision. The first stop was to drive north of Olympia to Luhr's Landing near the Nisqually Reach (plug in 4949 Dmillhur Dr. Olympia on your device). One route is a short paddle towards the east to the perimeter of the Billy Frank Jr. Nisqually Wildlife Refuge.We knew we had a low tide, so our goal was to check this out. We noticed some other kayakers waiting for the tide to come back in. Instead of waiting to kayak, we just did some beach combing. It's always a good idea to check out the weather and the tides before doing any boating on the Sound. Here's some good information about marine weather and tides.

While in the area, we suggest driving the 10 minutes to the official entrance of the Billy Frank Jr. Nisqually Wildlife Refuge and checking out the 4 miles of hiking trails.

In search of a kayaking spot, our next stop was driving the 25 minutes north back to Olympia to check out West Bay Marina in the south part of Budd Inlet. If you don't have a paddleboard or a kayak, no problem. You can rent paddleboards here. If you want to rent kayaks, then adjacent to this is Tugboat Annies, which provides kayak rentals. They also provide some food and beverages. 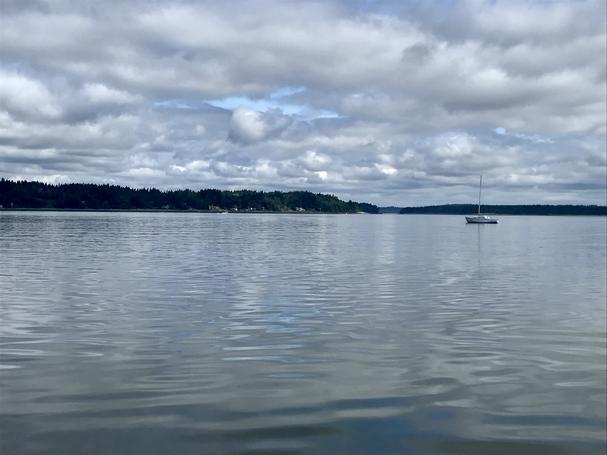 We headed the short distance to Boston Harbor Marina just a 20-minute drive to the north from West Bay Marina. They offer kayak and SUP rentals and food and beverages. You should note that these rentals are dependent on weather conditions, and come September, the hours will vary. 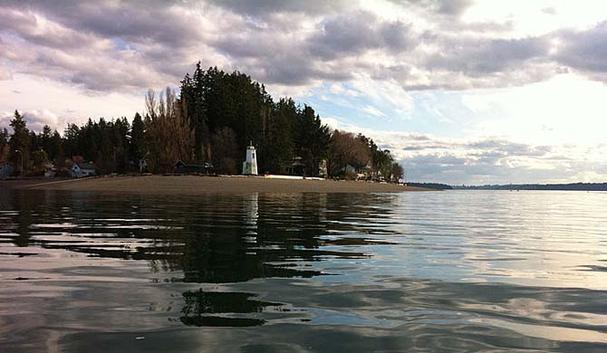 With limited time and a low tide imminent, we just did a short 30-minute excursion to the west to check out Dofflemyer Point and the associated lighthouse. This lighthouse first became operational in 1887 and, through the years, served as a beacon for ships going into Budd Inlet, which terminates south into the Port of Olympia. In the past, these ships were loaded with lumber and would make their way out of Olympia and onward north. The lighthouse is listed as a historical place and listed on the Washington Heritage Register; sadly, it sits on private property, so you cannot visit it.

"Rent, Ride, and Relax" is the quote from Swantown Inn's web site regarding their Ebikes. I was game for this! I spent several minutes and chatted with Innkeeper Nathan, who suggested routes for the two-hour ride. The extensive bike routes are from former railroad beds, so they tend to be flat. The best part is that after you go the short 5 minutes on the street (that has a bike lane), you spend the entire time on a paved path that vehicles cannot access. Just bikes and people walking! Nathan mapped out an easy 18-mile trip.

The route starts on Woodland Trail, and you go about 2.5 miles to the junction of the Chehalis Western Trail and turn left (west) onto to the Chehalis Western Trail. You take this about 6 miles. The trail will go through rural areas with some beautiful forests. Then you can go a short distance on the road to Woodard Bay NRCA, however, we just retraced our route back to Swantown Inn.

We thanked Nathan for the great ideas on this bike tour; he had many other ideas for next time. One can take the Chehalis Western Trail 15 miles to connect Yelm to Tenino Trail. Here is a complete map. After peddling, some with some assistance from the Ebike, I was still hungry, so it was time for dinner.

We returned to our hotel and parked at the DoubleTree by Hilton Hotel Olympia, then took the pleasant 10-minute walk along the Budd Inlet and past Percival Landing and arrived at our destination, Olympia Oyster House. Their building was initially the home to seafood and associated shucking operations of the Olympia Oyster Company in 1859. Their oyster operations have since moved, but they are still in the area. Best of all, they provide oysters to the Olympia Oyster House, which I enjoyed for dinner. The renovations on this building are stunning, and there is ample outdoor seating to enjoy the waterfront. 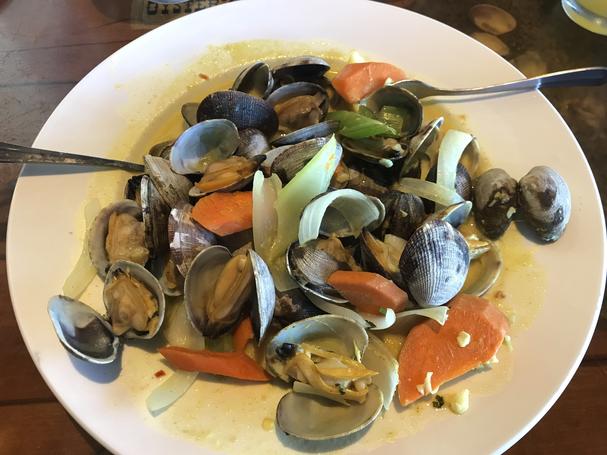 I had been thinking about oysters since we arrived, and I took a long time to figure out which type I should have for dinner. The five beer & oyster flight was very appealing. However, I went with the Baked Pacific Oysters Beacon Bleu. Rich and juicy oysters with bacon enhanced the taste. The oysters were lightly topped with bleu cheese sauceElizabeth had the Steamers Thai with- mirepoix (mix of onions, carrots, and celery), cilantro, lime & coconut curry broth. I was so happy that she shared them with me; all those vegetables were delightful in that spicy curry sauce. After dinner, we took the pleasurable walk back to the hotel and enjoyed the boardwalk, which goes about one mile along the Sound.

We were not ready to return to the hotel and walked the short distance to Market 222. Our last visit there was when they first opened in 2015. Interestingly, we noticed that Chelsea Farms is there and expanded their menu beyond oysters to include many other seafood options and burgers. On this warm summer evening, we noticed the long line at Sofie's Scoops Gelateria. They must be doing well since they just opened another store! Sadly, we did not partakehe gelato and knew we need must

Time flew during our visit, and there were so many things that we didn't have time to do. On our next trip, we will kayak in the Nisqually area and hike the Mima Mounds again. We hiked this six years ago and found it interesting with its hundreds of domelike mounds spread out and located only 25 minutes to the south. Until next time!