The Kitsap Peninsula is home to a national treasure for kayakers, stand-up paddle board enthusiasts, and others who enjoy getting out on the water. The Kitsap Peninsula National Water Trails is 371 miles of 79 shoreline locations that are part of the National Water Trails System and is the only saltwater trail in the USA. The KPNWT is a major attraction for water-related activities such as boating, bird-watching, diving, fishing, and more. As you can see from this map the trails circumnavigate the entire peninsula with the northernmost point outside of Hansville and the southern end in Shelton. There are many organized paddling and supported events during the summer that you should check out. What a great way to experience the waters around the peninsula! From Seattle, it’s a short 35-minute ferry ride with beautiful views of Elliott Bay and the Olympic mountains. From there, it’s a lovely less than 1-hour drive. 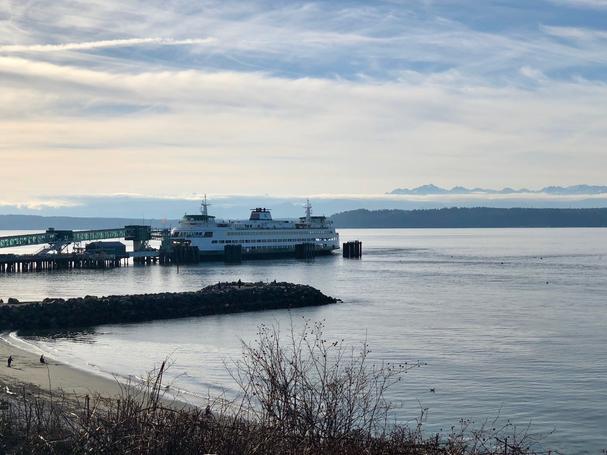 We started our own experience of the trails in Liberty Bay Marina in downtown Poulsbo. We put in off the public boat ramp in Liberty Bay and paddled out amongst the hundreds of boats moored at the marina. It was fun to check out all the beautiful and interesting boats; many were pleasure boats, but there were a lot of working fishing boats around. The day was partly sunny and very calm, so watching the cloud shadows on the glassy water was fun. As we paddled out past the pier, we were greeted by a family of seals – out sunning themselves on this lovely day. 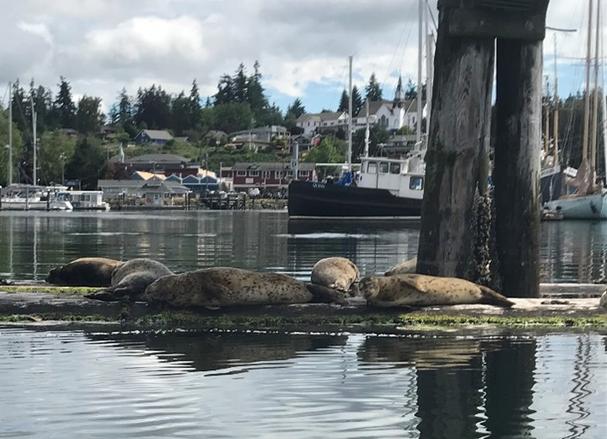 Rentals are available at Olympic Outdoor Center, right on the wharf with locations in Port Gamble as well. 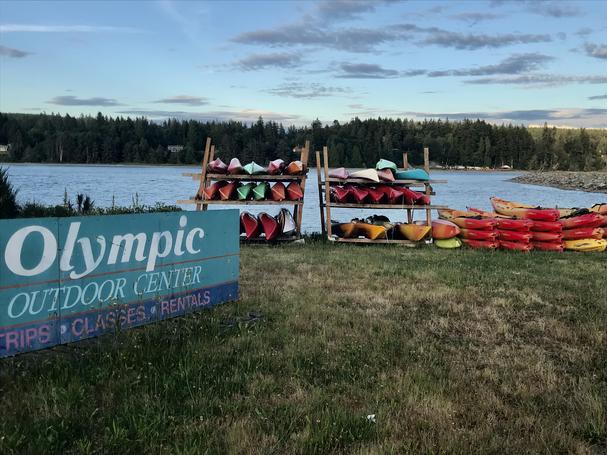 The Olympic Outdoor Center offers lots of fun and educational opportunities for paddlers of all experience levels. We were fortunate to go on their Bioluminescence Tour out of Port Gamble. We met at the edge of Port Gamble Bay at 9:30 at night. 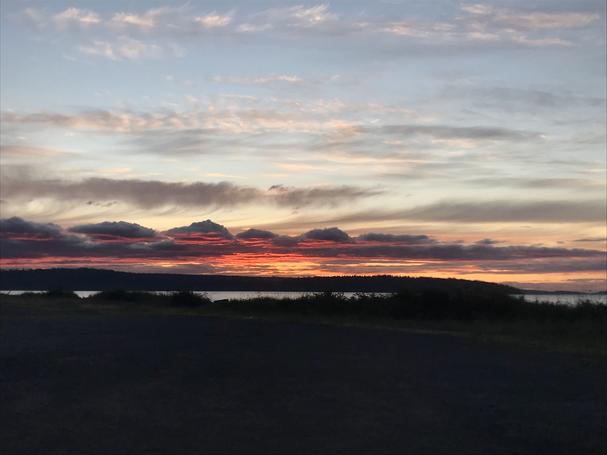 After the requisite safety talk and a quick tutorial for beginners, we were ready to hit the water. Bioluminescence is a natural phenomenon that occurs when certain organisms, like plankton, are disturbed. A chemical reaction causes energy to convert into light and some believe that this light is a process of communication among the organisms. As we paddled in the increasing darkness, the experience became more and more magical. At first it was as if my eyes were playing tricks on me. But the darker it got, the more it was clear – when I tipped my paddle, or my hand, into the water, sparks of white and blue created a light around the disturbance. It was unlike anything I’ve ever seen.

We also had a bit of time to get to know John Kuntz, owner of Olympic Outdoor Center. John grew up canoeing the Kankakee River, south of Chicago. Once he had moved to the Seattle area and tried saltwater kayaking – he was hooked! He was indeed involved in the effort to have the Kitsap Peninsula National Water Trails designated in 2014, and John has actually paddled the entire trail system in one trip! He is an evangelist to get kids and families out on the water. 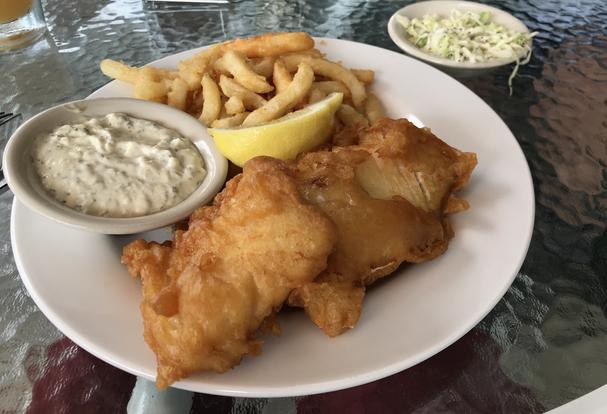 You can’t paddle too far without stopping to “refuel”! We found two great restaurants in downtown Poulsbo – within walking distance of the marina. For lunch, we stopped into JJ’s Fish House   where the casual ambiance was enhanced by the salt smell from the bay and the fun atmosphere of downtown Poulsbo. I ordered their signature Fish and Chips, which was delicious. The fish is dipped in tempura batter and then deep fried. It was a beautiful shade of brown, crunchy on the outside and flaky on the inside. It was served with fries and some of the best coleslaw I’ve ever had. The orange poppy seed dressing gave it such a bright tang. Michael ordered the Alaskan True Cod Fish Tacos, which he really enjoyed. Chunks of Alaskan cod with Asian slaw and pineapple salsa nestled in a flour tortilla – yum! 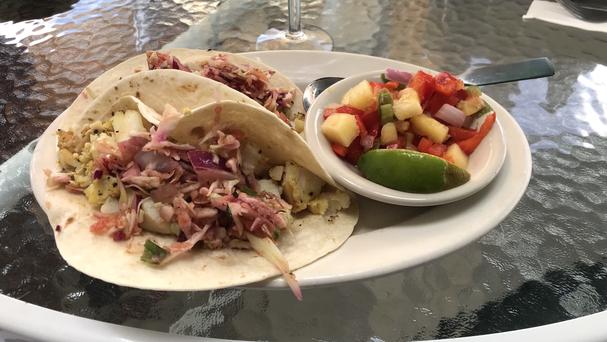 For dinner we came back to the waterfront for Dalla Baia, right next door. Dalla Baia means “near the bay” – which is true since it is a short walk to Liberty Bay and right off Front Street. I’ve never been to Italy, but the atmosphere in Dalla Baia was just what I’d imagine a small bistro in Italy would be like. It was homey and warm, and it smelled amazing. The open kitchen configuration is probably responsible for the aromas floating through the restaurant. The walls are decorated with signs designed by local civic promotor Bill Austen, including a sign for the location’s previous tenant That’s-A-Some Italian, a Poulsbo institution for three decades. The new owner group, including Cecilio and Grisel Topete and Sandy and Angela Kolbeins, are hoping to match or extend that record. The fact that the long-serving staff has stayed on goes a long way to help with that ambition. 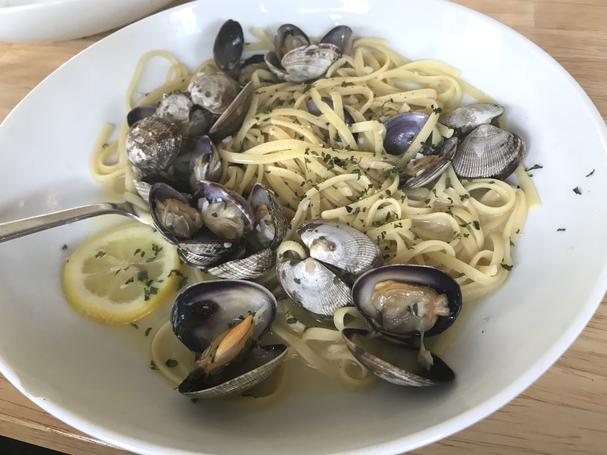 Cecilio told us that the clams they serve came from nearby Dabob Bay on the Hood Canal and are fresh daily, so that became the theme for our dinner. Michael had Clam Linguine, served with a white wine, garlic, and butter sauce. It was light and delicious. I ordered the steamers, and they were wonderful, meaty, and flavorful. It was good they brought us extra bread to soak up the tasty broth. The whole dining experience was delightful. 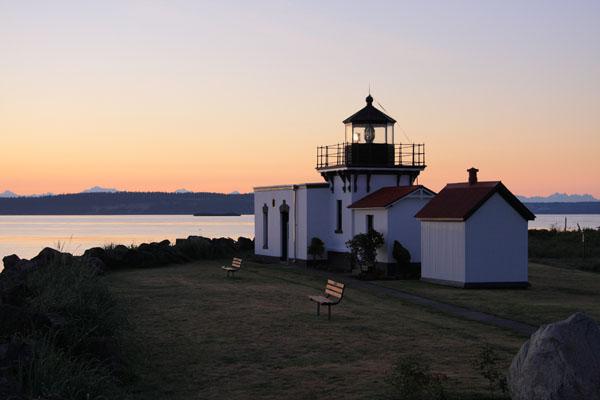 Being married to a meteorologist, we tend to listen to many of the NOAA Weather radio broadcasts. One reading has always fascinated me – an outpost called Point-No-Point. The name just tickled my fancy! So when I found out that it is actually on the north end of the Kitsap Peninsula, I really wanted to check it out. A short drive from Port Gamble found us out on the far reaches of the peninsula in an area of wind-swept beach and beautiful views. The lighthouse at Point-No-Point was built in 1879 and is currently managed by the U.S. Lighthouse Society. There are two vacation rentals on the property – the Keeper’s Quarters House, which is a large house that would be perfect for a family, or two couples, and the Keeper John Maggs House – a small cottage more suitable for a single or couple.

The views from Point-No-Point include both Rainier and Baker Mountains, the Seattle Skyline, and many of Puget Sound’s islands. There is an adjacent nature reserve, so along with the potential for whales and seals swimming by, there is a good chance of catching glimpses of eagles and other large raptors and a wide array of waterfowl and other birds. In fact, it is a popular destination for birdwatchers.

The situation for kayaking is a beach launch, but with the strong tides of the sound, we decided that we were not seasoned enough. We’re still sticking to bays and inlets for a while.

While it seems quite far away – Point-No-Point is just an hour’s drive from Seattle. Like the whole Kitsap Peninsula, it is part of a nearby playground for a weekend or a day trip. Well worth the trip!