Is It Really Just the Water?

Hood River, Oregon, along the Columbia River, has been declared the windsurfing capital of the world for many years. Now, there are many other human-powered alternatives to speed along the river: kiteboarding (or kitesurfing) and wing foiling, to name a few. This trip, we enjoyed the Columbia River Gorge's speculator views and wildflowers as the drop back and some biking. Of course, let us not forget the nourishment and beverages needed to sustain a successful journey. 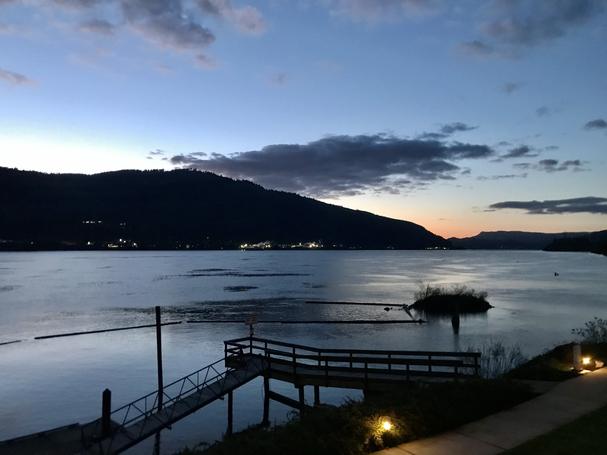 Our home base was the Best Western Plus Hood River Inn, the only waterfront hotel in Hood River with direct river access. Relaxing on the patio and watching the sunrise was a great start to the day and an even better way was a lox and bagel delight from Riverside - Waterfront Hood River Restaurant and Lounge. 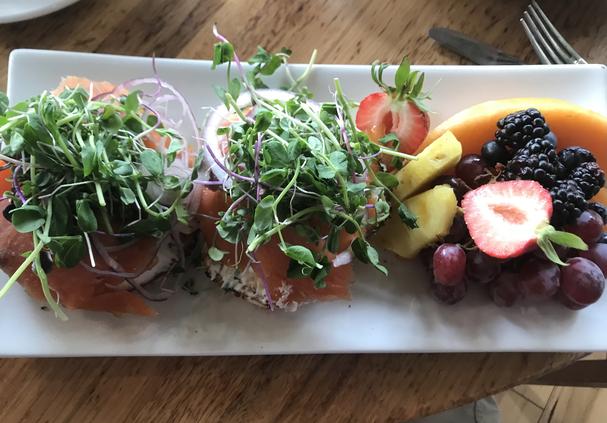 The presentation with fresh fruit was outstanding, layered with cream cheese, capers, onions, and topped with sprouts. WOW, that was a meal that lasted me the entire day.

While I was enjoying this feast, I spoke with the Director of sales, Kathleen O'Connor McNew. We enjoyed the view across the river to the small town of Bingen, Washington, where she lives. She has taken her stand-up paddleboard the 1 mile to work. What a great commute!

Mount N Barrel provided a fun day of biking. Our guide and key owner, Ali McLaughlin, is in her 6th year of business. As the name suggests, this tour combines biking and wine tasting as well as some orchards for fresh foods. Ali was quoted in a recent National Geographic issue: "25 amazing journeys in 2022." The Columbia River Gorge was listed as one of them.

We started at Mark O. Hatfield Trailhead and biked along the scenic Historic Columbia River Highway Trail. This highway is no longer used by vehicular traffic and offers endless stunning views of the Columbia Gorge, so we stopped often to soak up the views. 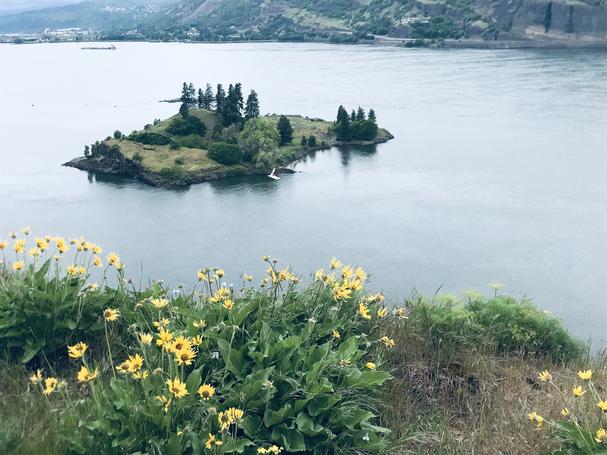 After cruising about 5 miles on our e-bikes, we walked the bikes across the first street we encountered and stopped at Randonnee Coffee Co. in the small community of Mosier, Oregon: population 482. After this brief nourishment, we rode the short distance to Idiot's Grace Winery. How about that name? Owner and winemaker Brian McCormick chose that name as a self-deprecating statement about why he would buy a farm and run a vineyard during these times.

Our vineyard tour was given by Brian's dad, Rob McCormick, who owns a vineyard across the river in Lyle, Washington. Rob said he used to be in the food industry. We later found out that Rob's roots were with McCormick & Company, the spice company. 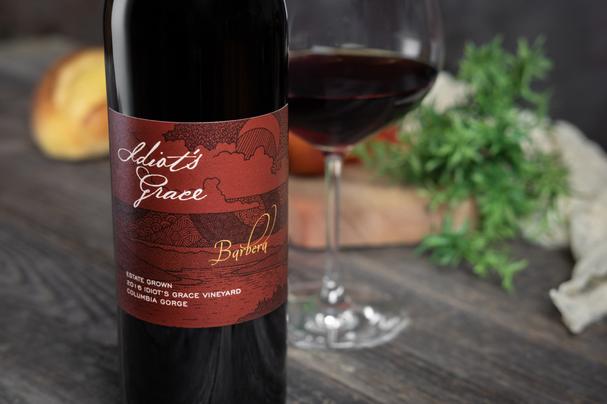 After the walk around the vineyard, we started wine tasting and enjoyed the refreshing Sauvignon Blanc and Semillon blend. Light lemon and honeysuckle notes. We then sampled many of their reds, and my favorite was the Barbera which also happens to be Brian's favorite. We continued with our tasting on the outside covered patio and noticed some brief showers. Then a somewhat intense debate ensued about whether we should continue our bike ride after wine tasting or go to plan B. Plan B was to drink additional wine and then hop in the van for a drive to Rowena Crest Overlook with its dramatic views of the gorge the bright flowers of balsamroot and lupine. After a  brief walk around, we noticed a trailhead sign to McCall Point, 3.5 miles total and 1070 foot gain. I'll do this hike next time. 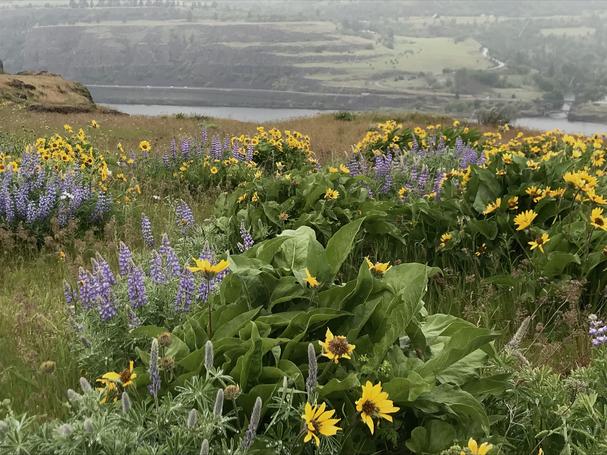 The last stop was a late lunch and cider tasting at The Gorge White House. The property has been there since 1901, and now the current owners are Pat and Mary Beth Kennedy. Their son Andy manages the farm, and the other son Jack, who trained in culinary arts in Europe and Australia, is in charge of the food cart. The family brings together four generations of farming.

Jack's food cart is no ordinary cart; it's a permanent structure consistently providing farm-to-table delights with many ingredients from their farm. I sampled the fresh Pear Quesadilla with freshly picked pears and locally sourced bacon and cheese. It was so good! These quesadillas and pizza ordered by others were so tasty and filling that we needed to move our dinner reservations to two hours later. 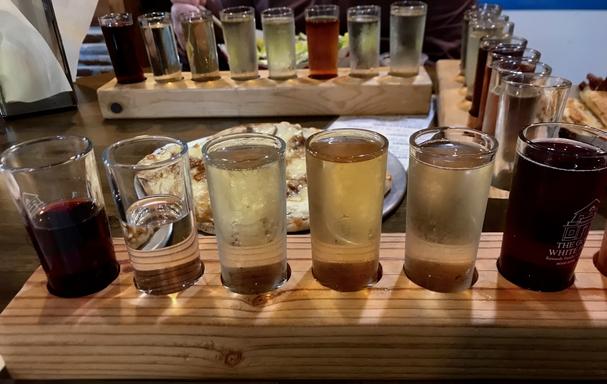 We then sampled their hard ciders made at Mt. Hood Winery. I have never been a big fan of ciders, mainly because I have been so focused on wines, but today was a game changer! The winner for me was the Honey Lavender with a base of apple cider, a light mix of lavender, and orchard blossom honey. The other big winner for a summer refreshment was watermelon.

After an afternoon of sipping wine and cider and a hardy filing of quesadillas, we wanted some exercise before our dinner. Thus, we dropped in the core retail of Hood River, where we counted six wineries with tasting rooms and two microbreweries. After our walking tour, we took the brief 20-minute walk back to the hotel to change for dinner. 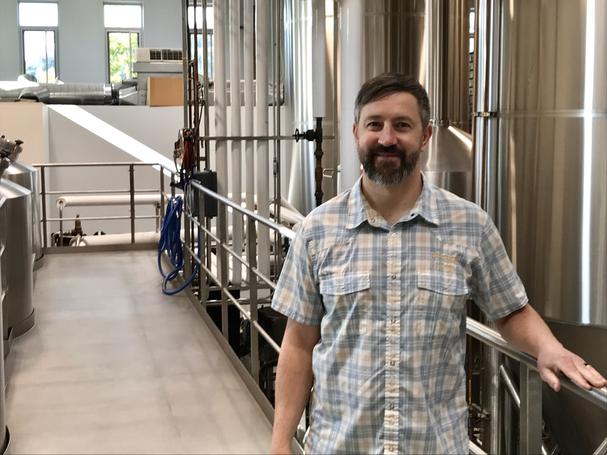 The Hood River Waterfront Trail, which goes a total of 2.8 miles, was our path to dinner.  This goes past the Hood River and along the Columbia River, where we saw someone kiteboarding very fast! We continued to our destination, a 1.5 mile walk to Pfriem Family Brewers. We met with Brewmeister Josh Pfriem, one of the co-founders.

Their focus is a mix of typical Northwest-style brews, thus selections of IPAs and then German and Belgium beers, leading to a strong blend of Lagers and Pilsners. We chatted more about the expansion and the new Brewhouse equipment from German. They expanded from 5000 barrels in 2012 and can do 60,000. Much of the Pilsner hops are from Germany,  Yakima, Washington, and Oregon's Willamette Valley. 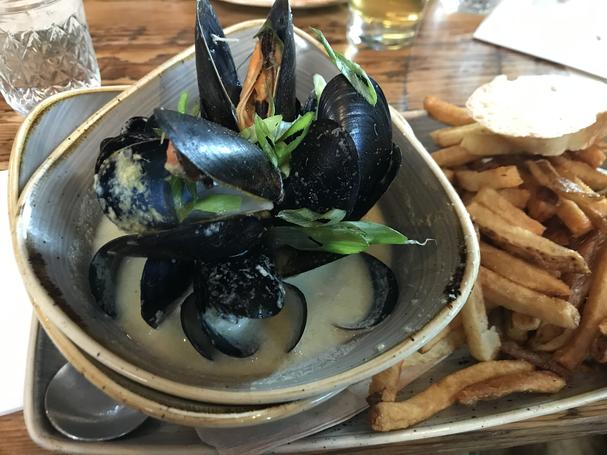 The big hit of the night's menu was the Pacific Northwest Mussels. These mussels had a nice kick, nestled in a booth of green curry, coconut milk, and a Pilsner dashi.

After a leisurely walk back to the hotel and a restful night's sleep, I was ready to embark on another fun day.

On our last day, we started with breakfast and took the short walk to the retail core of Hood River at Broder Øst. Chad Hinman is the owner and chef, offering many Scandinavian delights. Chad grew up in the Gorge and gained his culinary apprenticeship in Portland, Oregon with Swedish restaurateur Peter Bro. Then Peter suggested Chad take his skills back to the Gorge.

We all sampled the Danish Pancakes served with Lingonberry jam (a Northern European staple) and lemon curd. Then I tried their pickled herring, Sourced out of Poulsbo, Washington. Poulsbo has its roots as a fishing village and is known as "Little Norway." 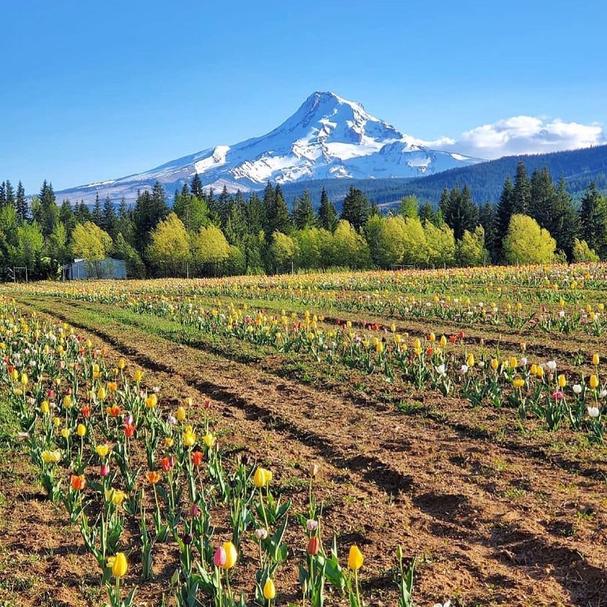 Day on the Farm

From Mt. View Orchards, you'll find a spectacular view of Mt Hood just 25 minutes away. You can also pick flowers, shop for arts and crafts, enjoy delicious flatbread, and have some wine and beer. It's a unique setup in which the public, at no fee, can pick flowers and seasonal fruits and simply leave a donation. 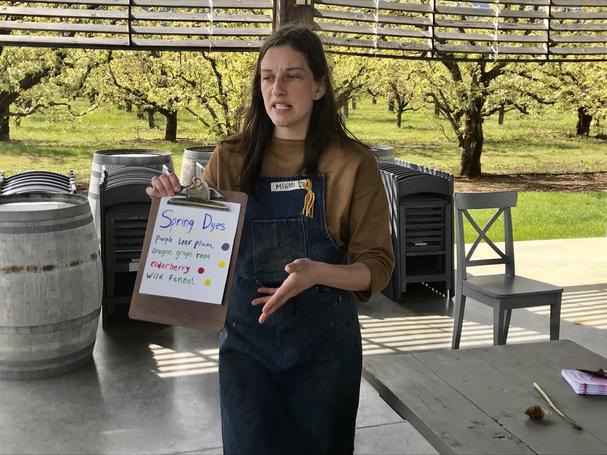 Before any picking started, we attended a craft workshop hosted by Megan of WildCraft Studio School. We worked with native plants: purple leaf plum, Oregon grape root, elderberry, and wild fennel. The goal was to extract natural dyes by boiling the plants for an hour. As the plants cooked, we picked wild asparagus and morel mushrooms. We will see later what I did with these.

We were now ready for a feast and walked the five minutes to The Grateful Vineyard. Wines, beer from their Mountain View Brewery, hard cider, and non-alcohol were all on offer. We started with fondue and sampled their beverages; the sparkling Riesling was the big hit with our group. Then we tried the Pear Pizza and a spicy pizza with jalapeno - both winners!

After the busy day on the farm, we retired to the patio at the hotel and watched the peaceful Columbia RIver. An hour later, we headed downstairs for dinner in the hotel at the Riverside - Waterfront Hood River Restaurant and Lounge. I started with the fried calamari with Calabrian chile aioli was just the kick needed to start the meal. The main course was an outstanding tender steak prepared by Executive Chef Mark DeResta's team. 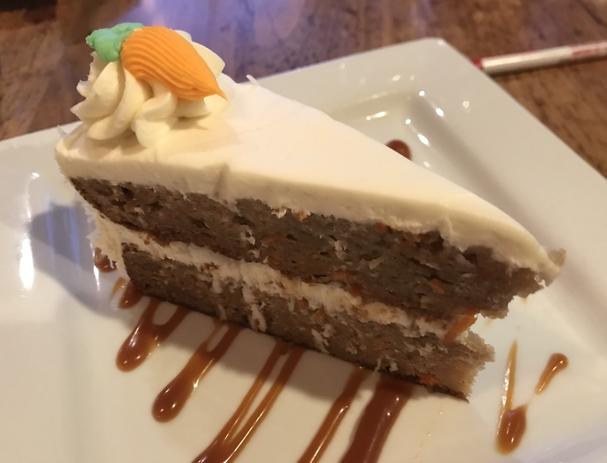 The dessert was a delicious layered carrot cake with coconut cream frosting prepared by the in-house pastry chef.

Sadly it was time for our small group of travel writers to head home. After the less than 4-hour drive, I was back home and greeted by my wife and co-writer, Elizabeth. I prepared a dinner with some of the fresh pickings from my trip; mushrooms and asparagus with steak. Then a promise was made that we would head together to the Gorge soon. 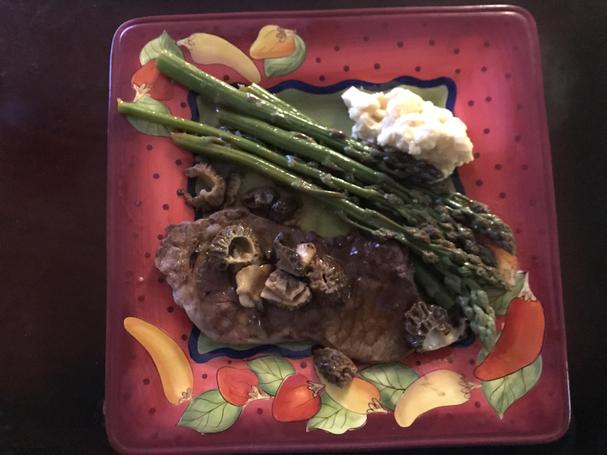