For The Simpsons aficionados, we are not referencing Berger's Burgers, the drive-in that Marge Simpson used to work for before marrying Homer.

Uneeda Burger, in Seattle's Fremont district, looks like a typical wayside burger shack. It is very inviting, with its big side porch and welcoming blue exterior. But there is a big difference between Uneeda Burger and your typical burger joint – Chef and owner Scott Staples! Scott learned the culinary arts as a kid, growing up with his father Dixon Staples in Denver, CO. Dixon owned three popular restaurants and taught his son both the art of cooking and the business of owning a restaurant.

Scott soon left the nest and traveled from Denver to Steamboat Springs, to Telluride, to Boston, working in fine restaurants and honing his skills. He finally ended up in Milan, Italy, where he worked with well-known Italian chef Gualtiero Marchesi. Marchesi was the first Italian chef to earn three Michelin stars and is considered worldwide to be one of the world's culinary masters.

Scott and his wife, Heather, finally ended up in Seattle (lucky us!) to open Uneeda Burger. They specialize in gourmet burgers, sides (including a seasonal tempura), sandwiches, salads, and shakes. They also have a great selection of craft beers and wine.

Currently, they are having an exceptional take-out pairing of their Bison Burger and Lemberger wine from Kiona Vineyards and Winery in Richland, WA.

Lemberger is a blend of 85% Lemberger, 5% Cabernet Sauvignon, 5% Carménère, and 5% Mourvèdre. It is a medium-bodied red – known as the 'prince of German reds. It is fresh and juicy – with notes of dark fruit and pepper. Kiona produced the first commercial Lemberger in 1980. Since then, it has become a favorite. And it pairs beautifully with the Bison Burger! 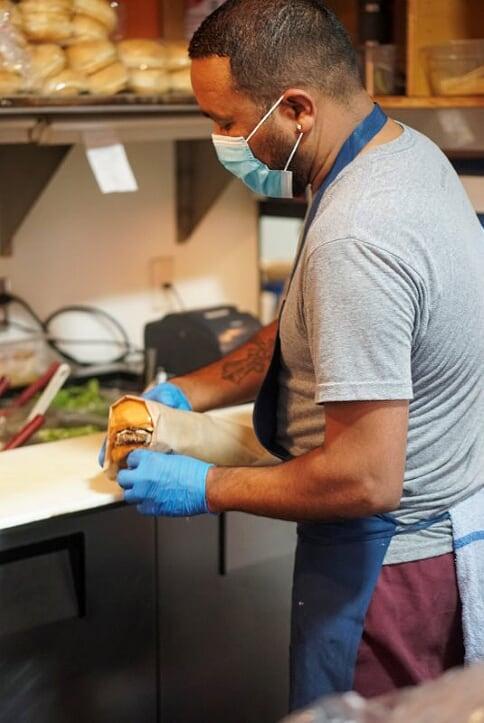 If you are in the Seattle area – be sure to check out Uneeda Burger. But if you can't, you aren't out of luck. Chef Scott was generous enough to share with us the recipe for the Bison Burger, and the Lemburger is available by mail-order for $17. What a great value!

Red Onion Jam (Makes 2 cups, leftovers keep for up to one week in the refrigerator)

Procedure: Julienne the red onions. Add all ingredients except the vinegar, thyme, and salt and pepper to a pot and simmer slowly over medium-low heat, stirring regularly until the onions are very soft, then turn the heat off.

Then immediately add all other ingredients and season to taste, stirring gently until everything is incorporated and seasoned appropriately.