Part 1. It’s the weather! Not only are the dry, warm summers great for growing grapes, but the Tri-Cities area is also north of Napa so it gets two more hours of daylight. This also makes the Tri-Cities (Richland, Pasco, and Kennewick, Washington - a 3-hour drive from the Seattle area) a great Autumn escape for those of us in Seattle. Richland averages .54” rain in October and 1.02” in November – compared to Seattle’s 3” in October and 5” in November. So whether you are looking for wine tasting, hiking, or great dining – head to the Tri-Cities. 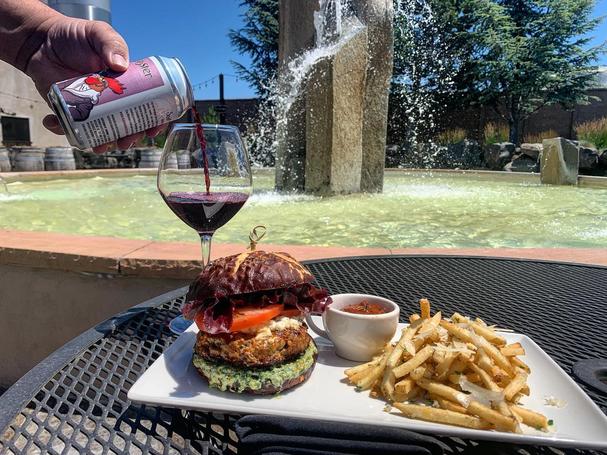 Starting off with some wine tasting, we stopped into Tagaris Wines.  They won the 2014 People’s Choice Award for “Best Outdoor Dining” and “Best Tasting Room.” The Taverna (Greek for small café) has lots of indoor and outdoor seating – both full of old-world charm and serves a delicious Greek-inspired Mediterranean menu. We started with delicious fried olives with mustard sauce. Michael was delighted with the Spanish Albondigas – pork and lamb meatballs served with spicy harissa (North African chili pepper paste), tzatziki, and Israeli naan bread. The spicy harissa was perfectly balanced by the coolness of the tzatziki and paired beautifully with the Tagaris 2016 Estate Malbec. The wine grapes are grown on the estate in the Alice Vineyard, named after owner Michael Taggares’ mother. (The family name was changed from Tagaris to Taggares when they immigrated from Greece a few generations back.) Argentina has the most plantings of Malbec but plantings are ramping up in nearby Horse Heaven Hills AVA. The fruit-forward, full-bodied wine holds up with intense flavors and spices, but because it doesn’t have a long finish, it is also very versatile. The Tagaris Malbec had notes of blueberry, red fruits, cocoa, and vanilla.

I also greatly enjoyed the Tagaris Gyro, thin-sliced lamb on an Israeli naan served with lettuce, cucumber, tomato, red onion, feta, and Tzatziki. For wine, I chose the Pinot Noir from Tagaris’ Arete Vineyard. Arete is Greek for “all good things” and this wine was a good testament to that. The light-bodied red paired well with the lamb, with flavors of cranberry, cherry, and cloves.

The winemaker at Tagaris is Frank Roth, who has deep roots in the wine industry. His father, Coke Roth, has been a respected international wine judge for the past 30 years. Frank worked in British Columbia at Sumac Ridge Estate Winery and Hawthorne Mountain Vineyards. He came to the United States to be Cellar Master for Barnard Griffin Winery. 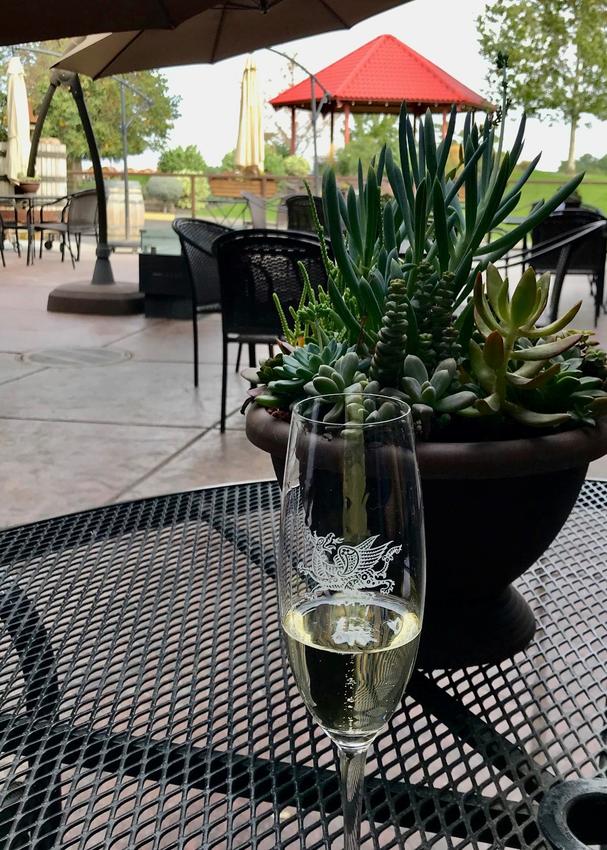 Speaking of Bernard Griffin  – it was practically right next door! So we took the 2-minute walk to taste some of Rob Griffin’s excellent wine. Rob is the longest-running winemaker in Washington state – having been at it for over 44 years! Bernard Griffin is a family winery, with daughter Megan Hughes as Assistant Winemaker and Enologist. Rob sources his grapes from several nearby AVAs – Columbia Valley, Wahluke Slope, & Red Mountain.

We started with the Albariño – a great Northwest Wine! The light-bodied white wine made from Albariño grapes, originally from Spain and a newcomer in the Pacific Northwest, and thriving. It’s a great happy hour wine with its citrus taste notes and melon aromas.

We also tried the Reserve Syrah. The Columbia Valley in Washington State is renowned for Syrah. The grapes produce a medium to full-bodied wine with flavors of plum and boysenberry, with a hint of green olive. And it pairs beautifully with a terrific charcuterie served by Bernard Griffon! 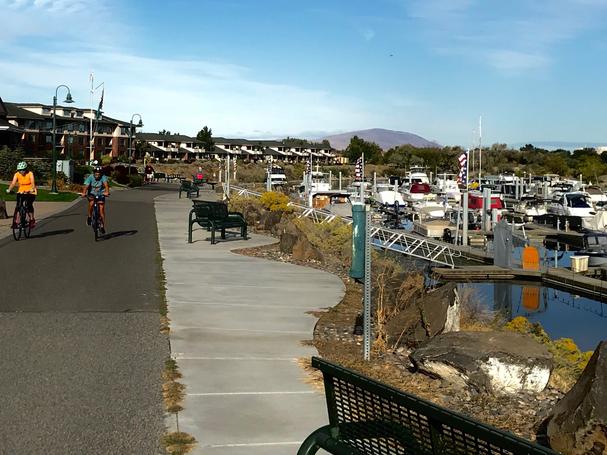 When ready to take a break from the delicious food and wine, Richland is home to a lovely bike trail. The Lodge at Columbia Point, where we were staying, has complimentary bicycles, so we headed out to the Richland Riverfront Trail.  The trail is just a little over 7 miles one way of a paved, level path for walking or biking along the beautiful Columbia River. The Riverfront Trail is part of the 23 miles long Sacagawea Heritage Trail that winds its way through all three of the Tri-Cities – Richland, Pasco, and Kennewick. 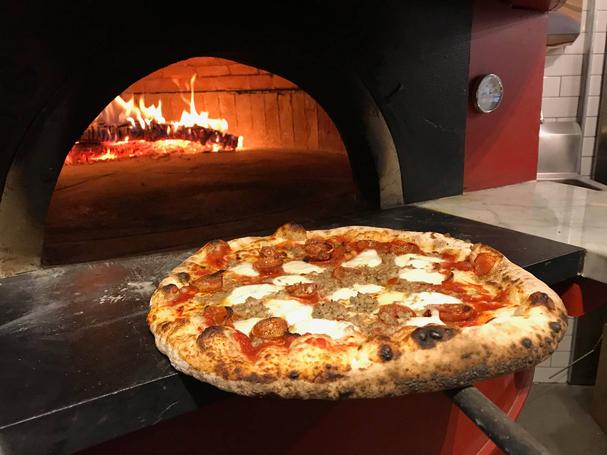 With our appetite restored we headed to the Dovetail Joint in Uptown Shopping Center. The menu was a challenge – so many choices! They call it Mediterranean style but the eclectic dishes include the fares of North Africa, Greece, Italy, Spain, and even some Asian cuisine. Michael ordered the Forest Mushroom Pizza, which was baked in a wood-fired oven from Italy. It was piled high with mushrooms and the crust was crispy with just the right amount of char on the edges. Luckily, he shared a bit with me so I know it was delicious. I ordered the Lamb Kabob on Pita, served with labneh (Greek yogurt), onions, cucumber, spicy pepper relish. The lamb was tender and flavorful and the spice was countered nicely by the labneh. The Dovetail has indoor and patio seating. 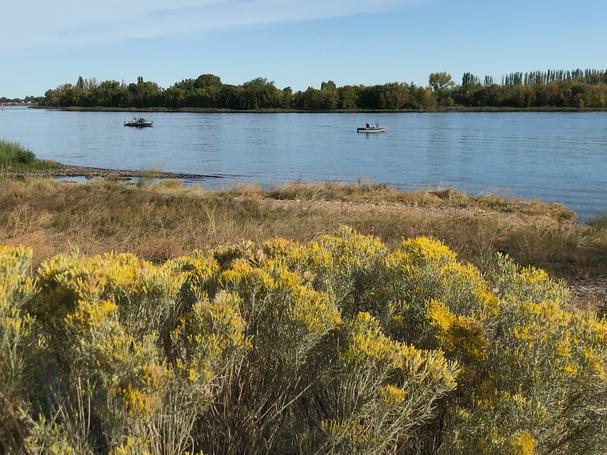 The next morning we were ready for some more physical activity so we headed down to the river to meet up with the folks from Northwest Paddleboarding at Howard Amon Park. While their storefront is at Howard Amon Park, they will also deliver paddleboards and kayaks to numerous launch points along the Columbia, Yakima, and Snake Rivers. We chose a couple of single kayaks and headed for the water. We paddled north for about an hour with a slight wind and a light current. We were accompanied along the way by a Great Blue Heron! 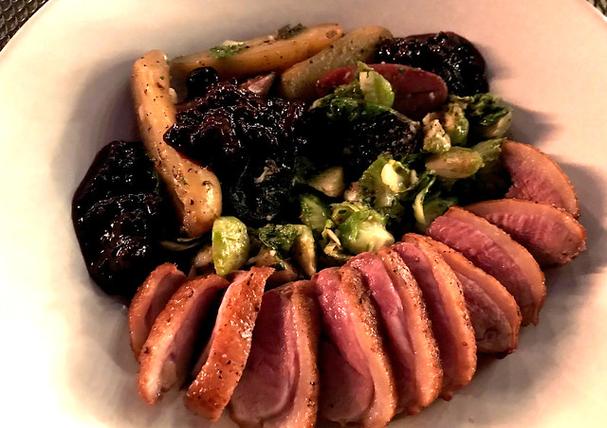 That evening we headed over to Fiction @ J.Bookwalter.  J. Bookwalter is one of the premier boutique wineries in Washington State and Fiction is their award-winning restaurant, selected as one of the top nine winery restaurants in the United States by the 2017 Zagat Guide. Fiction offers both indoor and patio seating. The patio is beautiful and fully equipped with heaters for chilly weather. Michael ordered the fresh Columbia River Steelhead Salad, with arugula, tomato, pine nuts, cilantro pesto, garlic aioli, and lemon vinaigrette. Steelhead are a true prize for fishermen! They are a native rainbow trout who migrate to the ocean as juveniles then return to freshwaters as adults to spawn. I had the special for that evening – Duck Breast served with Cabernet Jelly, braised Brussel sprouts, and fingerling potatoes. And it was, indeed special! Of course, accompanying all of the amazing food was some delicious J. Bookwalter Wine. The Bookwalter family has been involved in American agriculture for ten generations! Jerry Bookwalter, the father of current president John Bookwalter, steered them into viticulture in 1976. They are one of Washington State’s oldest wineries. Today, J. Bookwalter produces wines that regularly garner scores in the ’90s from James Suckling, Wine Advocate, and the Wine Spectator, along with many awards along the way. The wine we chose for dinner was the 2014 Antagonist Syrah. It was a deep dark ruby wine, with tastes of black fruit and pepper. The full-bodied wine was very fruit-forward, with wonderfully balanced tannins. The grapes were sourced from the Yakima Valley AVA.

The Tri-City area is a great destination if you are looking for excellent wine. There are 200 wineries within a 50-mile radius of the Tri-Cities. For a printable map click here.

The new kid on the block is the Candy Mountain AVA – established on Sept. 25, 2020. At just 815 total acres, it is also, by far, the smallest AVA in Washington state. The next largest is nearby Red Mountain at 4,040 acres.

Candy Mountain is also home to some great hiking, interpretive trails, and sweeping views. You can choose the 3.4-mile trail to the top, with 360-degree views of Mt. Adams, Mt. Rainier, and Mt. Stuart. Or for a short, no elevation gain walk, the Candy Mountain Interpretive Loop is just a little over 1 mile. There is signage noting native plants, geological history from the Ice Age Floods, and Hanford Site history.

More ambitious hikers can trek up nearby Badger Mountain with its elevation gain of 1500’. For the truly competitive, there is the Badger Mountain Challenge which features a 9.3-mile race, a 50-miler, and a 100-miler! 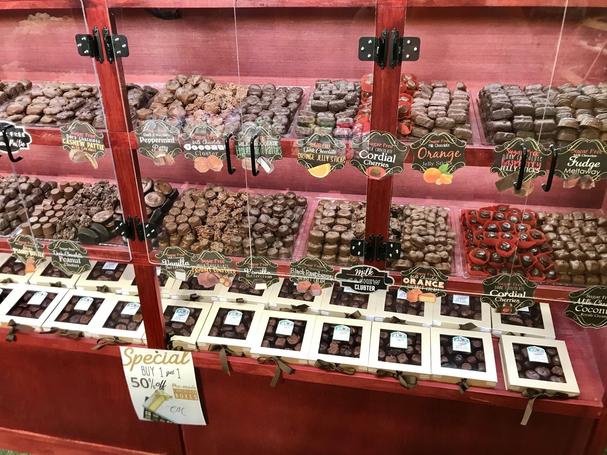 While we personally aren’t up to any 100-mile races, we will be returning soon to the beautiful Tri-Cities area – home of great outdoor activities, delicious food, and amazing wines. On the way home, we thought we would take some of the treats of the Tri-Cites home and stopped at the Country Mercantile.    Besides so many assortments of custom-made chocolates, they are also well stocked with local produce and an assortment of gourmet foods. We enjoyed many on the drive home!