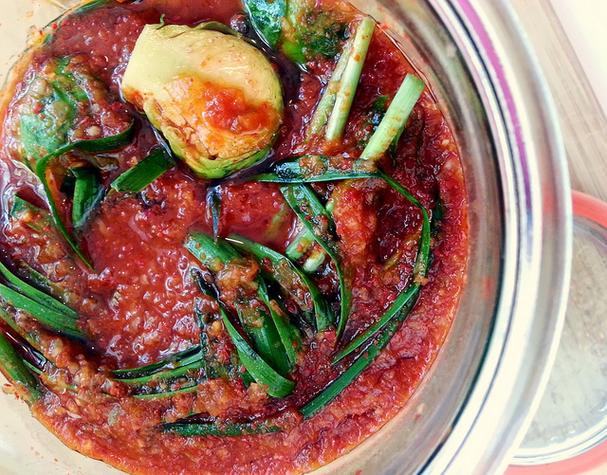 It’s been about 3 months since my celiac diagnosis and since then I’ve been religious about eliminating gluten from my diet. The pantry and fridge were immediately cleaned out, the toaster was replace with a new gluten-free-bread-only version, medications and multivitamins were checked, even potential gluten-containing lipsticks were ditched (that was a toughie). I became obsessive about reading labels. Until December, when I dropped down to about 99.8% of the time. I had allowed myself a little bit of leeway as I felt I was getting pretty darn good at knowing what things usually contained gluten, even seemingly harmless foods like imitation crab (whodathunk it’d be in a fish product?).

When this all started, part of my “plan to heal” also included healing my gut from chronic gastritis. So I’ve been on a bit of a bender with gut healing things like fermented foods and drinks. Though technically I’m supposed to steer clear of spicy foods, I cannot keep my hands off a good kimchi. Barnaby usually makes it at home, but we were so busy during the holidays we’d been buying our kimchi. Like really good Korean stuff. If you’re not familiar with kimchi it’s simply this: napa cabbage, red pepper spices, salt, and water. Then, you let that ferment in a pot until it becomes nice and bubbly and tangy and full of all the probiotic goodness your belly could ever want. So, it never, ever occurred to me to read the labels of store-bought kimchi. But lo and behold, it was in December when I slipped that sliver of a percentage point and did.not.read.the.label. As it turns out many kimchi, though not all, do in fact contain gluten. Especially the delicious brand I had been buying and enjoying wholeheartedly. The other lesson learned in December was about another ingredient I never considered would have gluten: fish eggs. Like the kind used in sushi. Yes, ikura (salmon eggs) and tobiko and masago fish eggs (those tiny little orange eggs found on top of sushi like California rolls) are often pre-seasoned with soy sauce.

Sneaky bitch, that gluten!  Just when I thought I had nailed her game, she beat me!

Here are some foods you’d never think can contain gluten. When in doubt, read the label:

Licorice
Chocolate and gum (I even skip the ones that are manufactured in a facility where wheat is processed)
Flavored potato chips (for good health you should just steer clear of this category in general)
Deli meats and hotdogs (gluten loves processed foods!!)
Pickles (some use malt vinegar - baaaad!)
Mustard (especially the squeeze kind)
Pre-made beverage mixes like Bloody Mary mix (check the label for barley malt flavoring or hydrolyzed wheat protein, and skip the Bloody Marys and Caesars at brunch)
Store-bought soups (yup, even tomato soup can contain wheat, but especially the creamy stuff like Cream of Mushroom and Chicken)
Sauces and salad dressings (BBQ sauce is a biggie)
Brown rice syrup (often found in processed foods and alternative sweeteners, which is derived from barley)
Ice cream and Fudgesicles (may contain malt extract, which is also derived from barley)
Yogurt (the flavored kinds)
Gravy (usually thickened with flour)
Meatballs (most often contains breadcrumbs as a binder)
French Fries (ask if they’ve been fried in a dedicated fryer. If not, skip them)
Medications and vitamins
Imitation crab meat (wheat is often used as a binder)
Curry powder and other powdered spices (manufacturers often use flour to prevent the spices from caking. Boo!)
Gazpacho, a Spanish chilled tomato soup (this one just tears me apart! Bread is traditionally used to thicken it)
Marinated meats and vegetables
Asian sauces (most of these are loaded with soy sauce! There are some safe ones though, just read, read, read!)
Wasabi (can sometimes contain a wheat-based food coloring)
Worcestershire Sauce (though Lee & Perrins is gluten free!)
Fish sauce (Red Boat is gluten free, but some are not)
Store-bought rotisserie chicken (some may use seasonings containing wheat, flour is sometimes used to help seasonings stick to the skin, breadcrumbs are sometimes used as stuffing. Ask the deli manager for clarification. If you're here in Seattle, Metropolitan Market's rotisserie chickens are gluten-free)
Miso (some brands)

Here's my take on an immune-boosting, gut healthy kimchi recipe (shown at top). I adapted it slightly from Sandor Katz’s wonderful Basic Fermentation: A Do-It-Yourself Guide to Cultural Manipulation. I add in Brussels sprouts (which are excellent for healing the lining of the stomach) in lieu of daikon (though you could do both) and a few splashes of gluten free fish sauce.

Makes one quart of kimchi:
1 large head napa cabbage
Sea Salt
2-3 cups small Brussels sprouts, trimmed and cut in half
A few green onions (including tops)
A few cloves of garlic
1 or 2 hot red chilies, depending on how hot peppery you like it
2 teaspoons fresh ginger
A few slpashes of fish sauce (make sure it's a gluten free one!)

Instructions:
Mix a brine of about four cups of water and 2 tablespoons of salt.

Coarsely chop the cabbage and let it soak in the brine until soft, a few hours or overnight.

Prepare the other ingredients: trim the Brussels sprouts and slice in half, grate the ginger, finely chop the garlic and chili and mix it into a paste with the ginger.

Remove the cabbage from the brine and rinse it well, with several changes of water.

Mix the cabbage with the Brussels sprouts and onions, sprinkle the vegetables with about one tablespoon of salt, and add the garlic-ginger-chili paste.

Mix everything together thoroughly and stuff into a clean quart-size jar or a kimchi pot if you have one. Add enough water to submerge the vegetables and cover the jar (not tightly).

Taste the kimchi every day. After several days of fermentation, when it tastes ripe, move it to the refrigerator to slow down the process.

Disclosure: This post contains Amazon Associates links because I believe in capitalism.