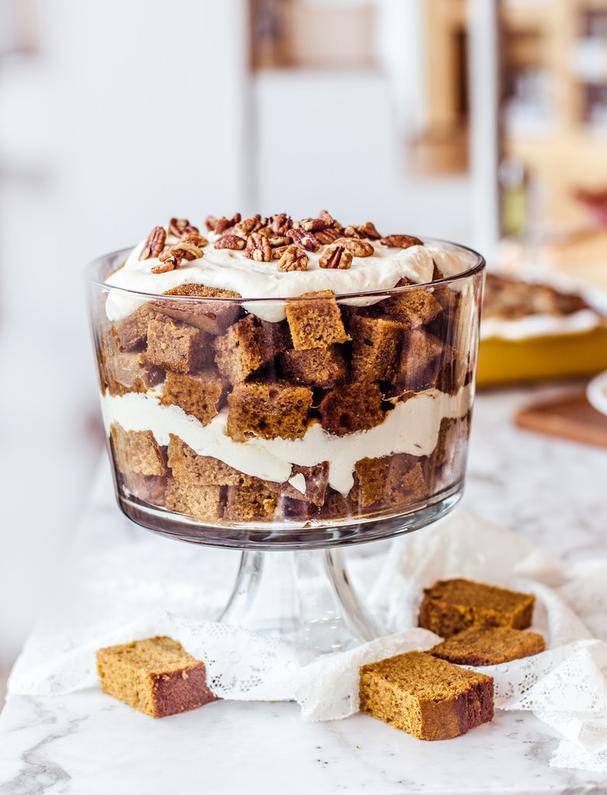 What do pumpkin bread, holiday spices, maple pumpkin butter cream, toasted pecans, and brandy have in common? They all come together in this decadent (yet easy!) pumpkin bread trifle recipe! Dallas-based Empire Baking Company is sharing with Foodista readers some of their favorite recipes to make at home for the Thanksgiving holiday and we're drooling over their festive trifle. Two scrumptious layers of maple syrup and brandy-soaked pumpkin bread are blanketed with fluffy peaks of pecan pumpkin butter cream then garnished with pecan halves to create a towering dessert that will be a hit at your Thanksgiving table! If you’re outside of the Dallas area and can’t get your hands on a loaf of their Empire Pumpkin Bread, check with your local bakery or make your own easy spiced pumpkin bread here. This is one of those beautiful desserts that looks like it took hours to make, but takes little time to put together. Perfect for the busy holiday season!

Directions:
Cut the bread into 15 slices, each 1 inch thick. Set aside.

In the bowl of an electric mixer fitted with the whisk attachment, beat together the cream, vanilla and sugar on medium-high speed until stiff peaks form, 2 to 3 minutes. Remove the bowl from the mixer and, using a rubber spatula, fold in the pecan pumpkin butter. Refrigerate until ready to use.

In a small saucepan over medium-high heat, combine the maple syrup, brandy and water. Bring to a simmer and cook for 1 to 2 minutes. Remove from the heat.

To assemble the trifle, place 3 slices of the bread in the bottom of a trifle bowl or deep soufflé dish, cutting the slices in half or into quarters as needed to form a single layer of bread. Using a pastry brush, brush the bread with some of the maple syrup mixture and let it soak in. Using an offset spatula, spread 3/4 to 1 cup of the whipped cream mixture evenly over the bread. Repeat the layering process 1 time. Garnish the trifle with the pecan halves. Serves 12 to 14.