The first thing you experience when you step into the door yard at Tenth Village Farm in Calais, Maine, is the elaborate, handcrafted buildings. Some are made of slab wood (board with the bark still remaining on one side) or even hundreds of bottles cemented together into true works of art. One thing is clear; practicality and true passion combined to make this unique place a home for human and animal alike. 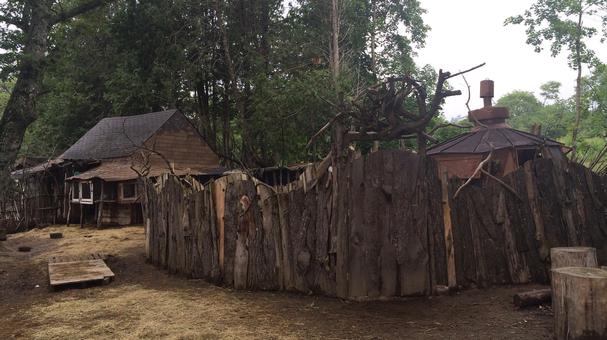 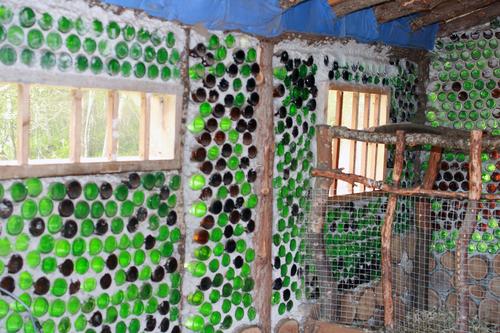 The trees shade the ground and only dappled sun lights the area as chickens of all colors peck and scratch the wooded and grassy areas. Rabbits can be seen scampering through the pastures as you follow the paths from building to building. The ease that the animals feel is the same sense of calm you feel while talking to owners Scott Graeber and Jennifer Yandow. Walking from building to pasture, it is clear that the animals live a contented life, the most spirited moment coming from their Jersey cow, who had spied a neighbor bringing some vegetable and bread scraps by, and knowing that the gift was for her. The idyllic scene is far from what most meat processors have just outside their doors.

"Every now and then, one of our rabbits escapes." Says owner Scott Graeber, as rabbits  casually hop out of the way, or just sit under the handmade runs as we walk past them. "We just let them be. They know we aren't going to chase after them so they stick around."

A Much Needed Resource For Washington County

Tenth Village Farm is the first poultry processor  in Washington County, Maine that is fully licensed by the State. For local poultry farmers and people who wanted locally grown and ethically raised animals, this is has been a long time in the making, and is desperately needed. Rabbits are classified under poultry regulations, so the farm raises meat rabbits, meat chickens, laying hens, goats and the dairy cow. Becoming a licensed processor was a long and convoluted journey for these two small farmers.

Owners Scott Graeber and Jennifer Yandow tell a story of a woman who came by looking for a place where she could have the last few laying hens and rooster butchered. She couldn't find anyone to do it for her.
She drove all the way from Ellsworth, says Scott, shaking his head. Can you imagine driving that far with a little cage in the back of your car, just looking for someone to help you out?
We starting thinking about how we were going to have meat for ourselves that we felt good about eating. We couldn't just buy it at Whole Foods because it was too expensive and we didn't want to buy it from the grocery store because it wasn't ethically raised. We thought we would just be processing our own meat, but soon it became clear that there was a need locally for a processor who was licensed so other producers could raise and then market their own animals.
What's in A Name?
Says Graeber of the unique name for their farm:
"The name Tenth Village Farm comes from a Turkish friend who said that it was an old Turkish political phrase. It was said that if you tell the truth, you will be kicked out of nine villages. We adopted it saying that there was always a tenth possibility. When we moved up here people told us not to get involved in farming and that it was a ridiculous waste of  time and money. When our friend came up to visit, he said "You should name it Tenth Village."
I guess it is going against the grain of economics right now, says co-owner Scott, "which is to mass produce. To do farming today you have to mass produce and we are just not willing to do it. Mass production forces you to cross that line of the ethical treatment of animals.
Our first standard is ethical, and then it is sustainable, and our third is affordable. Our idea is to always work in that order. It's tough because you can't be ethical and run an organic farm now, and keep it affordable. So the food goes to wealthy folks because they are the only ones who can afford it. We want to keep the food local and we mean truly local, where everyone can afford it. That is important to us. 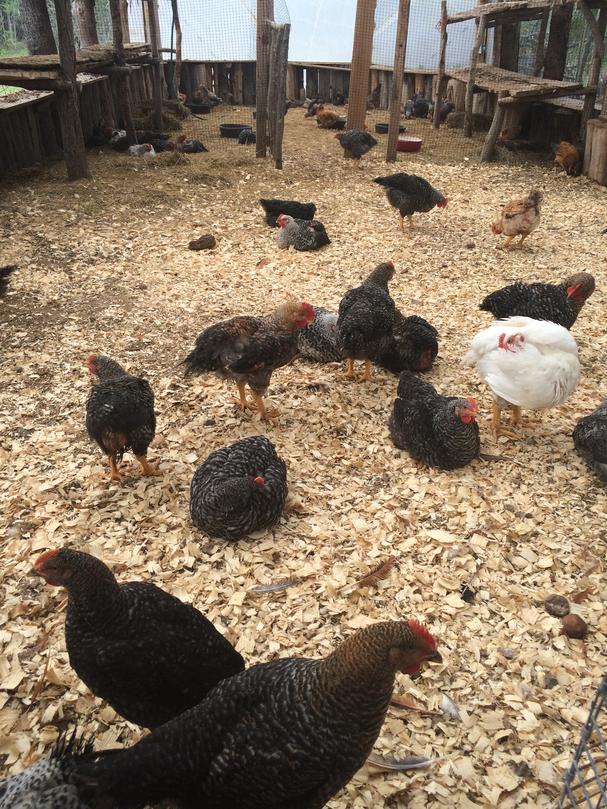 The Process Was a Long One
If it's been for a barter then butchering poultry for someone else is legal, but as soon as you want to start marketing it, you have to bring in the licensing.  That is not an easy process. For Tenth Village Farm, It's been a long process, almost three years from idea to actual license.
The butchering process is pretty streamlined and Scott wants to keep it simple. A customer calls and gets a date and time to bring their animals. The leave their animals in the outside cage on the deck of the processing facility, where the processing starts within minutes.
"I don't like to leave the animals waiting at all, it's better for them that way. So I am ready to go as soon as the customer drives in."
Simple and Sustainable
Keeping it simple also means to keep the numbers manageable. Scott  says that he does limit the number of birds he will process in a day. "I recommend no more than 20, although I could do up to 40."
"We are now moving into helping people realize how to ethically raise poultry, say Scott and Jennifer.  The Cornish cross birds are the most common, and many people are not aware that they are not to be raised like your common barnyard chicken. They have to have special care to keep them healthy and their meat undamaged. They have seen many people become overwhelmed and bring their birds younger than necessary because they have just given up raising them. Meat chickens eat a lot and need a lot more care than a free range egg layer.
"Really, we are the quality control. We don't want to process birds that we ourselves wouldn't eat. Our processing label goes on that. So education is important." Says Jennifer.
Along with meat birds that they process for customers, Tenth Village also raises their own chickens and rabbits to sell. Their chickens are a Heritage variety that take a few more weeks to finish, but are a healthier and more natural version of a meat chicken. Again, it goes back to ethics, says Scott. Just as their chickens are allowed to free range, their rabbits are in extra large cages with only a couple in a cage.
"These are much larger cages than the law says they need." says Scott, as we walked down the rows of assorted sized rabbits. "They are just much happier with this type of set up."
What The Future Holds For The Farm
Even with the apparent need for a licensed processor, Tenth Village Farm is cautious about dreaming too big. "We are really supportive of the local food movement. We want to keep our costs down, to keep the cost to the customer reasonable." Says Jennifer. Tenth Village Farm welcomes visitors, and encourages anyone interested in raising their own animals for themselves or even for resale, to come by and talk with them about how to keep it manageable and profitable, while ensuring it's always ethical and never overwhelming. Find Tenth Village Farm on Facebook.
For more photos of Tenth Village Farm, Click Here.