Vegetarians Make Their Mark Around The World

It’s clear now that vegetarian food is indeed making waves around the globe.  Not long ago it seemed traveling out of the US was a nightmare for vegetarians. I, myself, traveled to France and had an extremely hard time finding vegetarian food, NOT ANYMORE. I knew a huge shift occurred the day I found out France’s most famous Chef was moving toward a more plant-based menu. Chef Alain Ducasse recently announced he is ditching meat for more vegetarian items at his famed Paris restaurant in the hotel Plaza Athénée. Another turning point came this week when I read a study from the research group Mintel that said 12% of UK adults are vegetarian and 1 in 8 Brits claim they are eating more non-animal sources of protein. On my last visit to England it seemed if you didn’t eat Bangers and Mash or Fish and Chips you didn’t have a whole lot of other options.

As the first vegetarian to appear on the Food Network show Chopped, I myself have see lots of progress in the six years since I appeared on the show. You see more and more vegetarians on cooking shows these days. Last month Bravo’s “Top Chef Duels” even had a vegan challenge. Vegetarian food is a lot more accessible now too. Gone are the days where most restaurants only offered “vegetarian meals upon request.” Now top restaurants like Danny Meyer’s Gramercy Tavern and even Thomas Keller’s French Laundry offer entire vegetable tasting menus.

For years many have also complained that supermarkets offered little in the way of vegetarian proteins, but now you can walk into mainstream stores like Costco and ShopRite and buy tons of meat-free food. Companies like Veggie Patch offer meatless meatballs, Falafel and tons of other options that make cooking vegetarian at home easy. 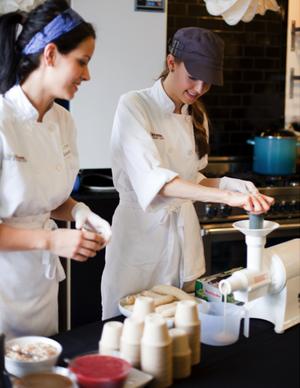 To embrace this global veggie shift I wanted to find out what some other leaders in vegetarian cuisine thought.

Natural Epicurean Academy of the Culinary Arts (one of the country’s leading vegetarian cooking schools) Founder & CEO Rich Goldstein says, “Our internal informal research shows that individuals and families are striving to include more plants in their diet.  While the vegan and vegetarian identified populations are growing, they still remain in the 4% range. However, the more important population shift is occurring in the 20-25% of the population that is actively seeking to eat less meat.” Goldstein says that shift means more people want to cook vegetarian cuisine and the Austin cooking school is seeing students travel from all over the world to seek out their meat-free curriculum. (see Natural Epicurean’s recipe below for Orange Tempeh Triangles) 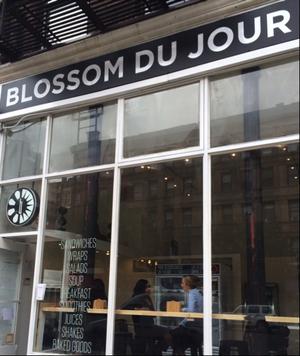 Blossom Du Jour owner Pamela Elizabeth says it does seem that vegetarian and vegan food has taken off recently like never before, “I think it's a combination of things. People are much more conscientious about what they're putting into their bodies today -- they want to live longer, healthier lives.  People are starting to understand that meat and dairy is not the way to go to achieve maximum health.”  Elizabeth should know, she just opened her 4th Blossom Du Jour location in New York City on the Upper West Side (Amsterdam between 81st and 82nd Street). Guests at Elizabeth’s restaurants find meat substitutes like seitan in her famous Seitan (wheat meat) Philly Cheese Steak and tempeh (fermented soy) in her Smoky Avocado wrap. 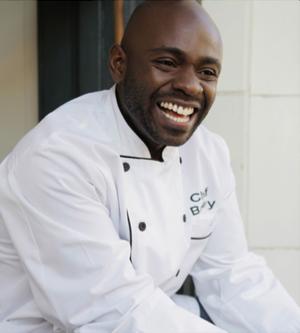 Private Chef Mark Bailey also wants people to know that “going vegetarian doesn't have to mean giving up your favorite ethnic cuisines.  In fact, now is the time to try and indulge in new foods.  Ethnic cuisines tend to be rich in spices with bold flavors which is just what many think is the sacrifice to giving up meat.   Greek, Vietnamese and Indian are just a few ethnic cuisines that offer distinctive flavors that won't leave you asking, 'Where's the beef?'” (see Mark’s risotto recipe below). 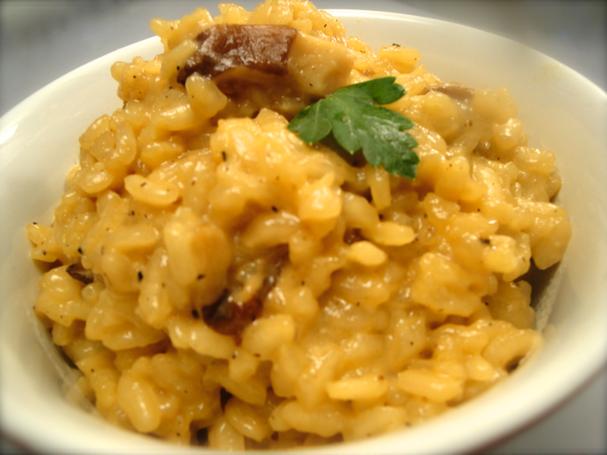 Heat oil in medium skillet over med-high heat.  Add mushrooms and stir occasionally for approximately 10 minutes or until tender and cooked.  Season with salt.  Remove from heat and set aside. 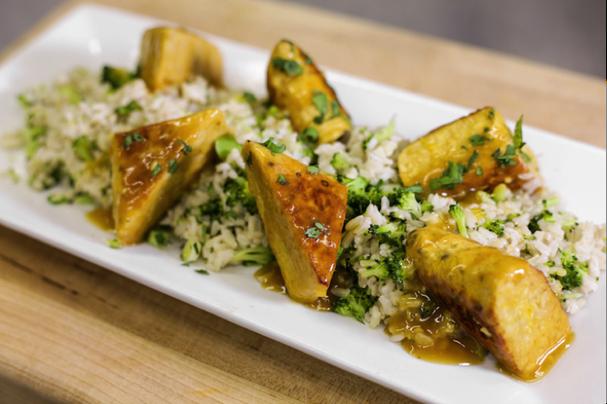 Use a small saucepan to steam tempeh. Steam tempeh for 10 minutes.

When tempeh is cooled, cut into 4 squares. Then cut each square on the diagonal.

Heat  olive oil in large frying pan over high heat. When the oil is hot but not smoking, add the tempeh and fry for 5 minutes, or until golden.

Turn triangles over and cook the other side until golden, pour glaze in pan.

Heat to a simmer and then turn heat to low.

Add kuzu and mix well until glaze goes from cloudy to clear. 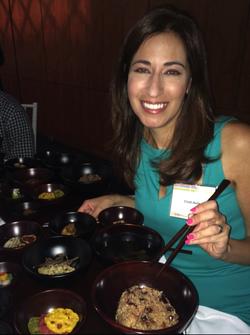 As a certified Natural Foods Chef I use my knowledge to take you on a food journey like none other.  From dining out to cooking at home.  From issues about the food we consume to the ethics surrounding where it comes from.  I cover all that and everything in between.  I’m a TV anchor/reporter who decided hard news just isn’t my #1 passion.  It’s food!  So I went to culinary school and now I’m combining my experience as a journalist, wth the knowledge I’ve learned as a Chef.  In addition to writing about food, I appear on various TV shows talking about food.

I’m was also recently the spokesperson for the great vegetarian/vegan line of food, Lightlife.  I am now helping other vegetarian and vegan companies get publicity through my company greengoddessfood.com.