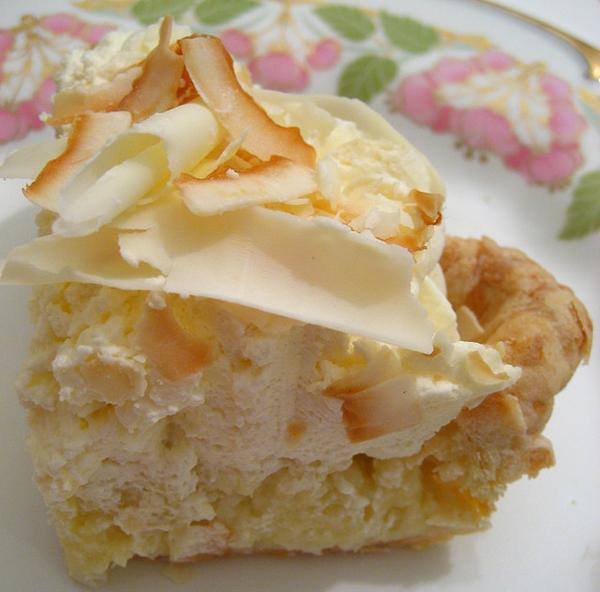 January 23 is National Pie Day and what better pie to feature than our ultimate favorite - Triple Coconut Cream Pie - the creation of Seattle restaurateur and celebrity chef Tom Douglas. To us, it's hands down the best coconut cream pie recipe in the world! This over-the-top delicious pie features coconut in the crust, in the cream and on top!

For the coconut pie shell:

In a food processor, combine the flour, coconut, diced butter, sugar, and salt. Pulse to form course crumbs. Gradually add the water while pulsing. Use only as much water as needed for the dough to hold together when gently pressed between your fingers. You don’t want to work the dough with your hands; you just want to make sure the dough is holding. The dough will be quite loose.

Place a large piece of plastic wrap on the counter and dump the coconut dough on top. Pull the edges of the wrap around the dough, forming a rough flat round. Chill for 30 minutes to an hour before rolling.

Once chilled, unwrap the dough and place onto a lightly floured surface. Using a floured rolling pin, roll out the dough into a 1/8-inch thick circle. Add more flour if the round sticks to the surface. Trim to a 12- to 13-inch circle.

Transfer dough to a 9-inch pie plate. Ease the dough into the plate. Take care to not stretch the dough as it will shrink during baking. Trim any excess dough to a 1- to 1 1/2-inch overhang. Turn the dough under the edge of the pie plate and flute the edge with your finger. Chill at least one hour before baking. This will help prevent shrinkage during baking.

Pre-heat oven to 400 degrees F. Place a sheet of foil or parchment paper in the pie shell and fill with pie weights (or dried beans) to prevent bubbling. Bake 20-25 minutes until golden. Remove the pie weights and foil and continue to bake another 10-12 minutes, or until the bottom of the crust has golden brown patches. Allow to cool before filling.

Note: The dough can be made ahead and stored in the refrigerator for 1-2 days, or in the freezer for a few weeks.

Combine the milk and coconut in a saucepan. Scrape the seeds from the vanilla bean and add both seeds and pod to the milk mixture. Heat over medium-high heat until it almost comes to a boil.

In a bowl, whisk together the eggs, sugar, and flour until well combined. Temper the eggs (keep them from scrambling) by pouring a small amount of the hot milk to the egg mixture while whisking. Then add the warmed egg mixture to the saucepan. Whisk over medium-high heat until the cream thickens and begins to bubble. Continue to whisk until very thick, about 5 more minutes.

Remove from heat and add the butter, whisking until it melts. Remove the vanilla pod (I like to gently rinse it off and put it in sugar for later use!).

Transfer the cream to a bowl and place over a bowl of ice water. Stir occasionally until chilled. Once cooled, place a piece of plastic wrap over the surface of the cream to prevent a crust from forming. Refrigerate until completely cooled (it will thicken as it cools).

Once chilled, fill your pre-baked pie shell with it, smoothing the surface. Using an electric mixer whip the heavy cream with the sugar and vanilla on medium speed. Gradually increase speed to high until stiff peaks form. Spoon or pipe the whipped cream over the entire surface of the pie.

For the garnish, sprinkled toasted coconut chips and shaved white chocolate curls (use a vegetable peeler to create the curls).