$1,000 Truffle Hunt with Augie and Animal

I was recently treated to a truffle hunting excursion as a birthday present. Sheri contracted a local forager and wild food producer, Terra Fleurs, to take my father and me into the woods on the hunt for these elusive jewels of the forest. If you've never had real black truffles (not the chocolate imposters), they have an intoxicating musty odor that tastes like a combination of overripe pineapple and mushrooms. We met our guide James Nowak, who goes by the forager pseudonym 'Animal', in Seattle's Capitol Hill neighborhood. He introduced us to Augie, his Lagotto-Romagnolo, an Italian water dog that is considered by many to be the best truffle hunting breed in the World.

Intros done, we loaded up in Animal's Jeep and drove about an hour North of Seattle to a tree farm where the hunting pair have had luck in the past. Truffles are the tuber of a symbiotic fungus that grows on the roots of trees, especially certain species. Since truffles grow underground, it's very hard for humans to locate them without raking wide swaths of ground. But dogs, with their keen sense of smell that is thousands of times more powerful than humans, can find them with ease.  As we got off the highway and headed into the forest, we saw that a recent cold snap in our area had deposited a blanket of snow under the trees. Animal was worried, he thought the snow might block the aromatic gasses that signal truffle locations to our canine guide, and said we might need to reschedule. After parking, we decided to give Augie a chance to prove his mettle. 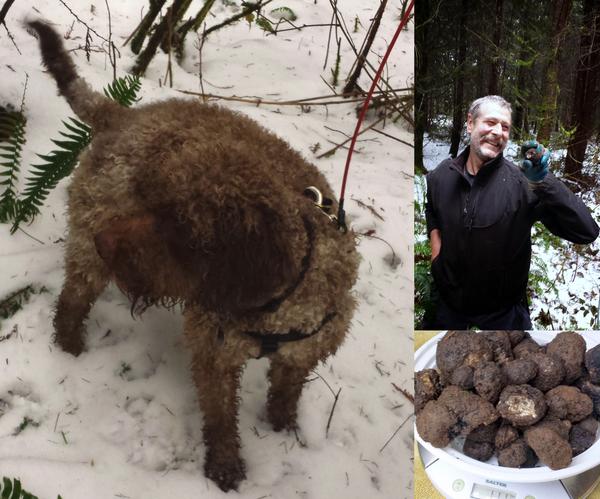 Animal described the procedure, which involved encouraging the young dog by saying "get it" and "zuke" a word he'd been trained to associate with truffles and more importantly, the treat he gets after finding one. Not 15 feet into the woods, Augie got very excited, started digging in the snow and then unearthed the largest truffles I'd ever held....we knew it was on!!

Over the next 90 minutes we chased Augie, completely unfazed by the cold snow, through the pines as he identified and excavated nearly two pounds of Washington black truffles, which would retail for over $1,000 at Seattle's famed Pike Place Market. After dividing our haul, we've since eaten them in a variety of ways. My favorite so far was combined with duck in a Black Truffle Caesar Salad and cooked sous vide with duck breasts (pictured above), which really highlighted the intense flavors of our haul. 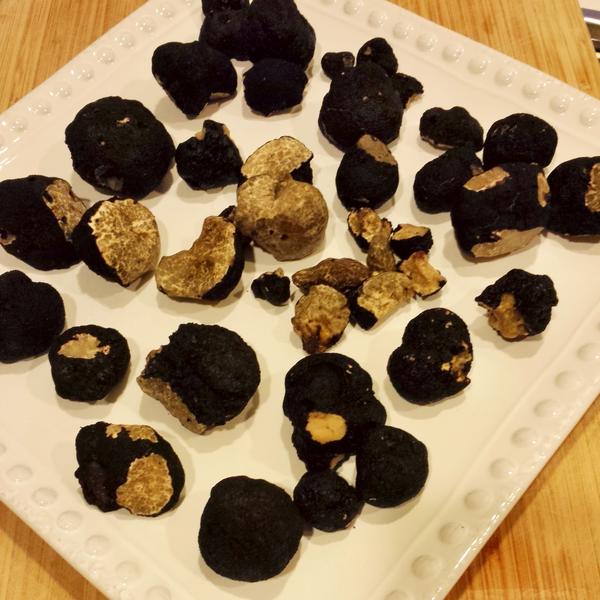