The Olympic Blow Down or The Big Blow! We were hoping for more of these epic storms which produced winds of up to 138 mph (strength of a category 3 hurricane) near Long Beach, Washington. The Long Beach Peninsula is a 28 mile-long peninsula on the southern Washington Coast. 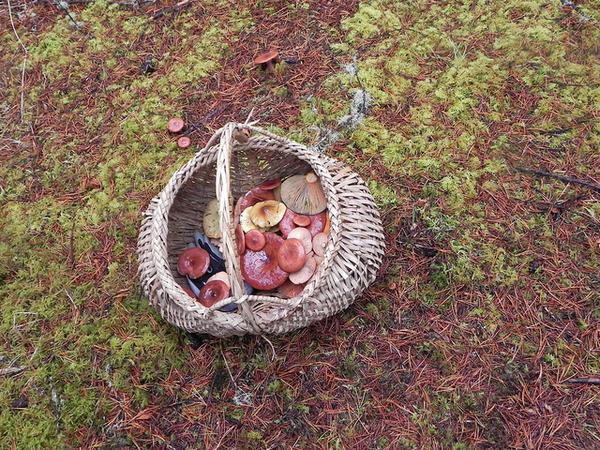 We started in Seattle and arrived less than four hours later. Much to our dismay, we had wind “gusts” of up to 10 mph and just some light rain on one of the three days with high temperatures in low 50’s. Seriously, some very nice weather for November. Although this was not perfect for storm watching, it was perfect for our mushroom hunting, with expert mushroom hunter David Campiche co-owner of The Shelburne Inn and China Beach Retreat. The first challenge was deciding where to start, since there are so many excellent locations. Since dinner time was approaching, we stayed close to David’s restaurant and house for the hunt. There were hundreds of mushrooms, and David was quick to mention that some are NOT edible. The most common edible one is the Lactarius Deliciosus, and we later found out how tasty this is. Mushrooms are so abundant in the fall that the Long Beach Peninsula hosts their Wild Mushroom Celebration with talks and special dinners.
We were excited that David had the chef prepare a dinner for us with the mushrooms that we gathered. We sat down in The Shelburne Inn Restaurant, which is a very charming, Victorian-style building and is a registered National Historic Place. I started with Innkeeper’s mussel and tomato soup, my favorite type of chowder. With a light tomato favor and plentiful mussels, the chowder was served in one of David’s handmade ceramic bowls. Yes David is an excellent cook and an artist as well. My wife enjoyed the beet salad grown, with veggies from a nearby farm, and finished with spiced Oregon hazelnuts. 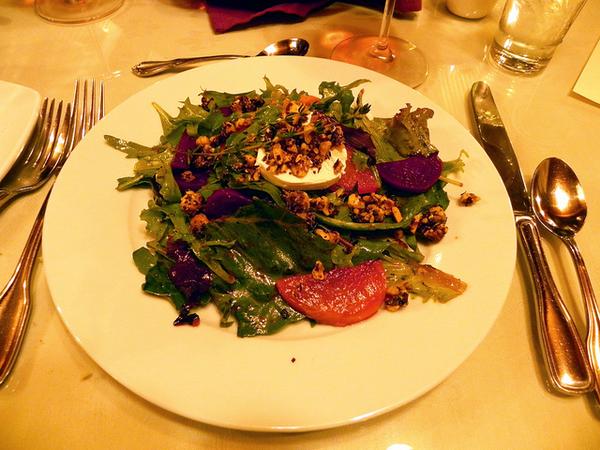 For the main course I had the New York Steak which was tender and wonderful. The beef is from famous Painted Hills Natural Beef, located in Eastern Oregon. My wife equally enjoyed the pan-roasted duck breast. Don’t tell her -  but the beef was some of the best ever!

After we finished the dessert of brownies with raspberry sauce and thanked David for dinner, we noticed a picture of him with famous chef James Beard. Beard had visited David here in the 1980’s, and it was not clear if David was teaching James some cooking tips or if James was doing the teaching. The folks at The Shelburne certainly do their fair share of teaching – while we were there we noticed co-owner Laurie teaching culinary and business secrets to some of the local high school students. This is part of the ProStart program in which the students get high school credit and a head start on culinary arts and restaurant management. Maybe during our next visit there we will taste some of their work. 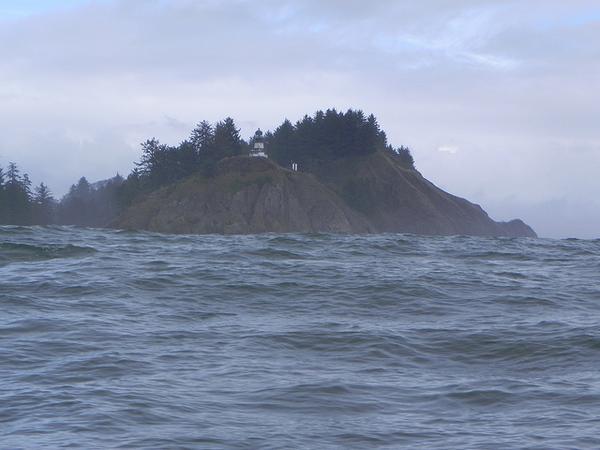 It was time for bed since the next day brought more hunting adventures, this time the venue would be the Columbia River. We took the short 15-minute drive from Long Beach to the town of Chinook to meet up with Captain Rob of Hi-Line Crab Charters. We boarded Rob’s crab boat and headed out on the Columbia River. The scenic route took us close to the historic Cape Disappointment Lighthouse. Rob quickly made me a successful fisherman as we hauled in my limit (along with everyone on the boat). Not sure how many Dungeness crab we caught, but I think it was close to the population of Chinook, Washington, which is 466. 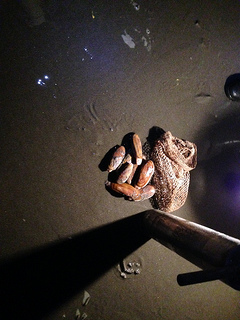 Upon returning to Chinook under blue skies, Captain Rob did a recount and said there are more people in Chinook than the crab on the boat. Later that day, we continued on our fish hunt; razor clams in Long Beach were next.  Our expert guide for this was Andi Day, Executive Director of the Long Beach Peninsula Visitors Bureau. Andi spent much of her life in God’s country - Pacific County, Washington. She is from the nearby town of Naselle, Washington which is even smaller than the big town of Chinook.

Andi quickly gave out assignments and my job was stomping on the sand, and, when there was a tiny dimple in the sand, Andi barked out instructions to my wife to dig fast and deep. Then we switched, and I dug fast and deep. Once again we quickly got our limit. One thing I learned was razor clamming is a good workout while crabbing is more of a workout for the Captain.
Before we left Andi for our next adventure we had a problem to deal with: what to do with all the fish we caught. Andi said she would can them and deliver to us next week. Truly a great guide!
Our next adventure is to storm watch and one of the best venues is the Pickled Fish Restaurant and Bar, located in the Adrift Hotel. With the ocean a short distance away, this was a perfect viewing spot. We watched the sunset, the small waves rippling in the sand. There were also plenty of folks walking on the boardwalk – perhaps walking its length, one-half mile, or the full length of adjacent Discovery Trail, 8.2 miles. Well, no storm today so instead we enjoyed the steamed clams and the Pickled Fish of the day: Trio of salmon-shrimp- and halibut, which was amazing. 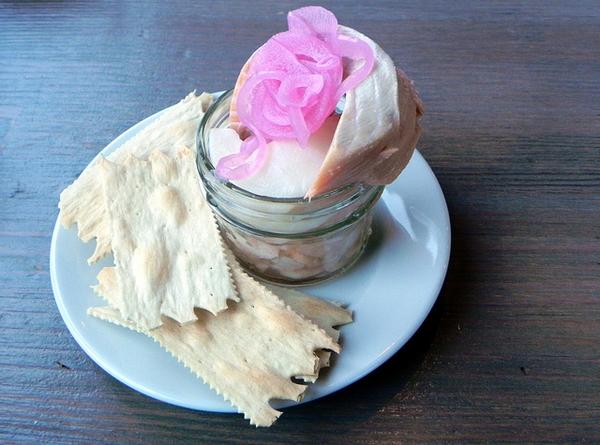 It was now time to retreat to our temporary home, in the Audubon Cottage at China Beach Retreat. This is located 15 minutes south of the town of Long Beach. These three days of storm watching were really three days of tranquility. The cottage is located on Baker Bay, with views of Cape Disappointment Lighthouse in the distance. During our stay we were visited by numerous heron, picking their way through the shallow water, and deer – who wandered into the yard for an evening snack. We certainly did not need an evening snack but were looking forward to our breakfast at The Shelburne Inn. And - they promised to prepare breakfast with the remainder of mushrooms that we had harvested. 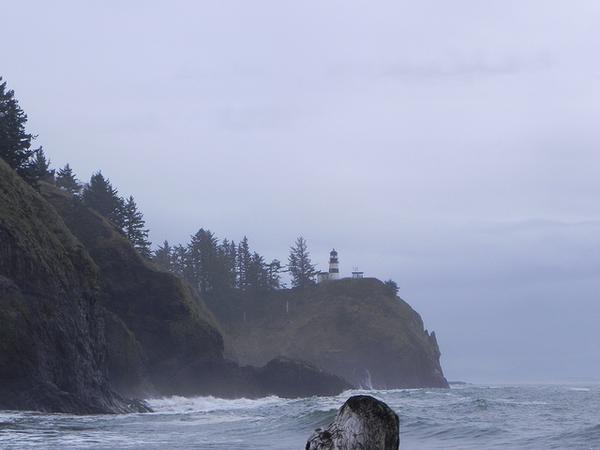 After the hearty and delicious breakfast, we headed to one of the best viewing points – Waikiki Beach. However – instead of flying to Hawaii we drove ten minutes to a beautiful little beach named after a Hawaiian sailor who had died there after a shipwreck long ago. The huge waves pounding on the cliffs below Cape Disappointment Lighthouse were mesmerizing as they crashed against the rocks. We could have spent the whole day soaking the sun and fresh air. We then walked to the jetty overlooking the mighty Columbia River that flows into the ocean. This is supposed to be the prime spot for storm watching but still no storm.
We were given a big list of things to do while in the area which included exploring the hiking trails at Cape Disappointment State Park, visiting the two lighthouses at Cape Disappointment and North Head and the Lewis and Clark Interpretive Center. So many things to do and just not enough time. Thus, the choice was simple – we returned to China Beach Retreat to enjoy the tranquility while planning our return trip so that we can finish the list.

About our guest contributors:
Michael Fagin is a freelance travel writer who has traveled across Canada and visited all the major Canadian wine regions. Mr. Fagin is currently touring the Pacific Northwest enjoying the wine country, dining, and hiking the region. While he is not writing Mr. Fagin is a weather forecaster  for West Coast Weather, LLC forecasting weather for the West Coast of the US as well as on an international basis. His wife Elizabeth Fagin, also a travel writer, is co-author of this article.