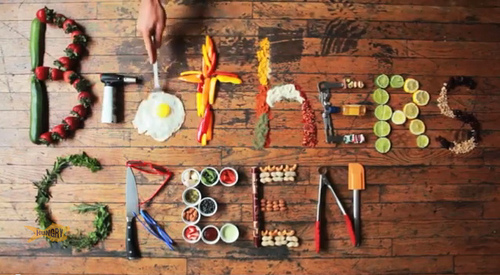 The Brothers Green of ‘Midnight Munchies’ uncover the secrets to every Jew’s favorite Christmas dinner: Chinese food! Their General Tso’s Christmas Chicken is lovingly wrapped in a simple homemade scallion pancake. Like in “A Christmas Story” when the family ate Chinese food after their turkey was ruined, Mike and Josh create this satisfying Chinese food favorite in HUNGRY's Holiday Kitchen. Watch the video and get the recipe below:

In a bowl whisk together soy sauce and egg. Add cornstarch and whisk to create a slurry. Coat the chicken pieces in the slurry and add to the deep fryer in batches. Fry chicken 5-6 minutes until a deep golden crust forms and the chicken is cooked through. Remove from the fryer and drain on paper towels. Reserve.

Preheat a wok or large sauté pan with canola oil. Add garlic and scallions and cook 1 minute until the flavors infuse. Add the reserved sauce and cook 1-2 minutes longer until the sauce thickens slightly. Add the fried chicken to the sauce and toss to coat, garnish with sesame seeds.

In a medium bowl combine flour and salt. In a separate bowl whisk together egg, egg yolk, water and sesame oil. Add the wet ingredients to the dry and whisk together until a smooth batter forms. Fold in jalapeno.

Create a taco by filling a scallion pancake with General Tso’s chicken and top with Asian slaw.