Drive your car with purpose and by all means don't hit anyone crossing the street.   This is the ghetto and there is a stark reality that says be careful.  Bragman's is located where Elizabeth and Newark, NJ collide.

The streets leading in still carry vague reminders of the glorious past of this neighborhood.

Philip Roth grew up not far from here.  He got out of town with his parents just as soon as they could.

This historic area was once a place of commerce, the surrounding neighborhoods housed middle class Jews, like my father and his parents.

Now things are a bit different, so don't stare!

That is until you get to Bragman's on Hawthorne Avenue.  Here, at Bragman's time has stood still.  Inside with the formica seating and steamy windows it's still the 1950's. 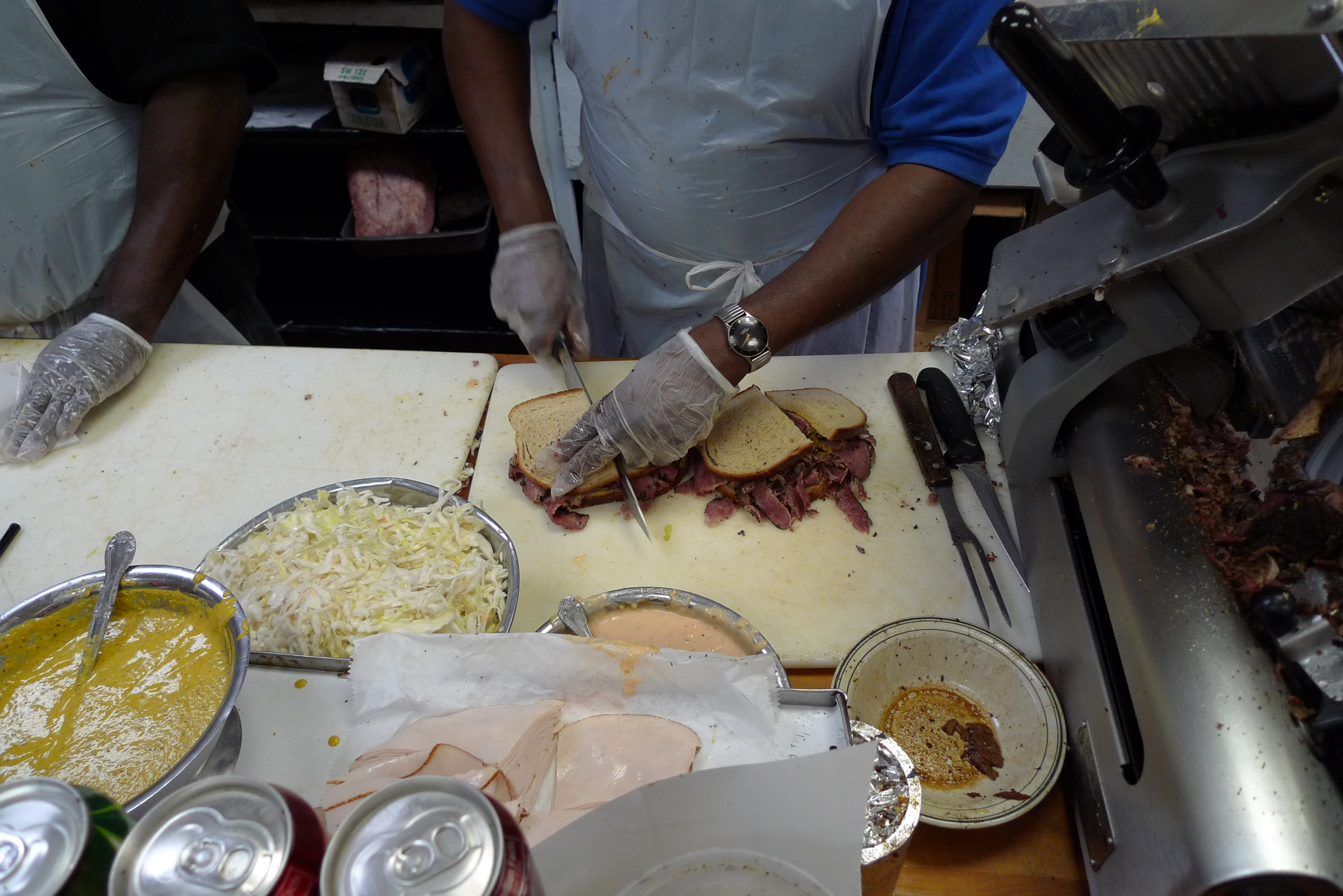 The food is virtually the same- an ancient stainless steel box set in the wall by the kitchen line holds steaming and sumptuous treasures.  They fill the air with the pungent aromatics of cloves, onions, pepper and mustard seeds.  This twang of history transports you to a place and time that I can only imagine.  There used to be Jews in Newark, thousands of them, my dad was born here and he lived along with his father and mother on these now blighted streets.  They used to come to Bragman's for a sandwich or perhaps a bowl of soup.

When I told him the other day that I drove down to Newark for a hot pastrami sandwich, there was real concern on his face.  "Why would you want to go THERE?"  After all, his concern was based in fact.  I tried to explain that you go to Bragman's for the food.  That's why you drive there.  It's that good.

The owner is a kind gentleman.  I imagine that he owns the building, otherwise why stay?  He makes a fine sandwich.  His bread comes from Pechters.  It’s the best.  Hearty to the tooth.  Mustard that speaks of history- I imagine my father tasting the smack of the bitter against the sweet of the pastrami.  A tear begins to form in my eye.

If you ever have a layover in Newark, take a taxi up there, sure they will hem and haw, but it's worth it.  I'll bet you'll eat better than anyone on your plane if you take one to go.  You'll make your fellow passengers very anxious by the aromas.  It's the slice of history that you can still enjoy.  Do your thirst a favor and get a Dr. Brown's Cel Ray soda and mix it with a Cream Soda.

It's going to give you that feeling that you haven't felt in decades if ever.

My favorite sandwich is the Jack's Special.  Corned Beef or Pastrami, on Rye.  Cole Slaw, Russian and get this.. Chopped Chicken Livers.  So sublime- creamy yet dotted with goodness from the chicken.  It's Jewish fois gras.  The liver here speaks from experience.  You must have some on your sandwich.  I've been with people here who couldn't ever imagine having chopped liver on a sandwich.  They'd just assume starve.  Starve then!  I'll eat.  Good half sour pickles are also served.

They frown on cell phones here, do yourself a favor and keep it in your pocket while ordering.

Tip the counterman and you'll be offered a nice hunk of savory- brined and smoked meat.  Take a sandwich to go.  Or two. 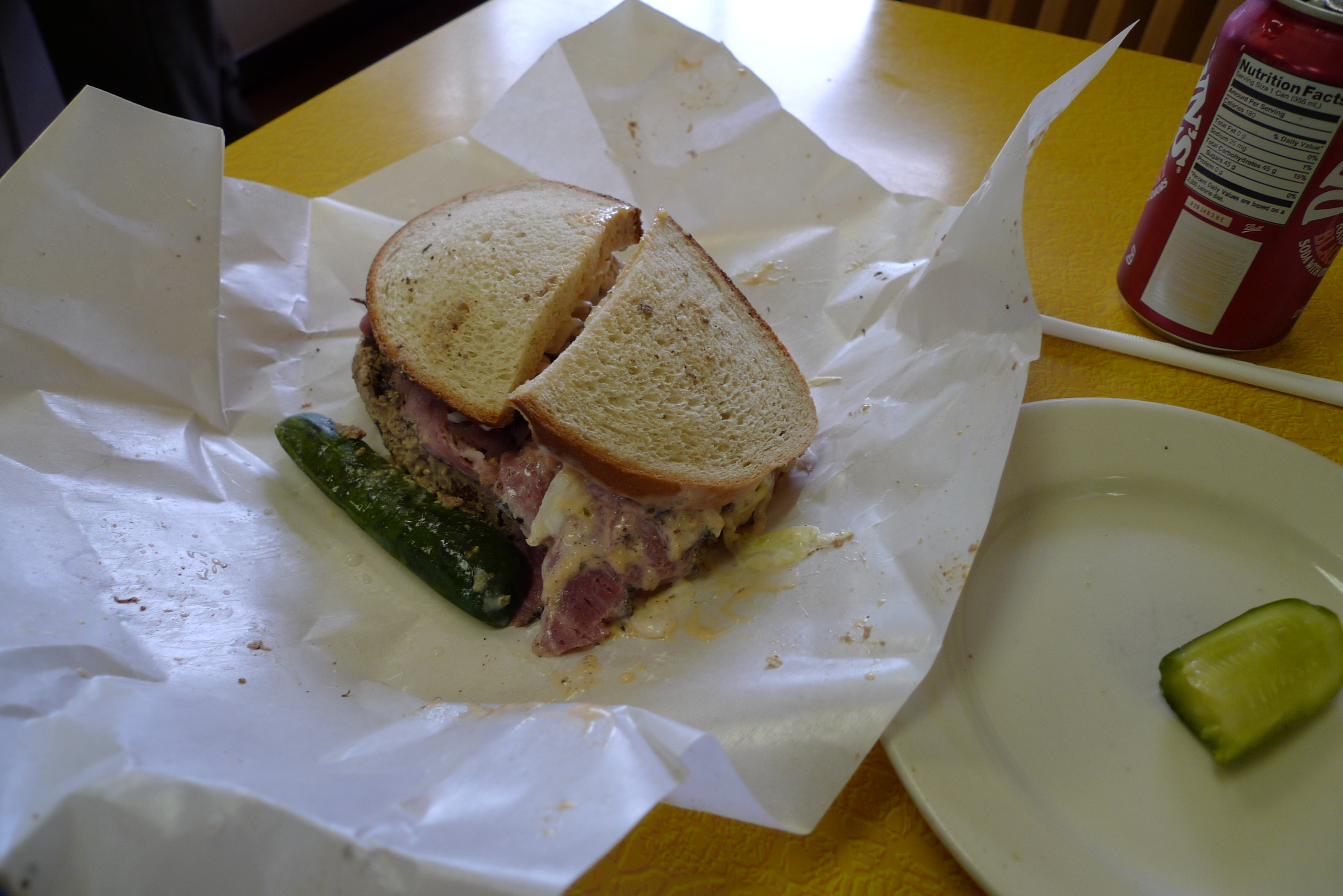 Sam Brummer bought this venerable place in 1962 and is still curing his meats in 55-gallon stainless steel tubs in the cellar.  His sons are running the day to day with reverence to the past- but keeping the present and the success for the future firmly in mind.

The gleaming NJ Devils Arena, just a few short steps away, is the new outpost of Hobby’s, bringing Sam’s dream of corned beef and pastrami to new customers.

Those customers may not know about the original deli on Branford Place.  But they should!

A recent visit to Hobby’s for lunch is a trip down memory lane for my stomach. 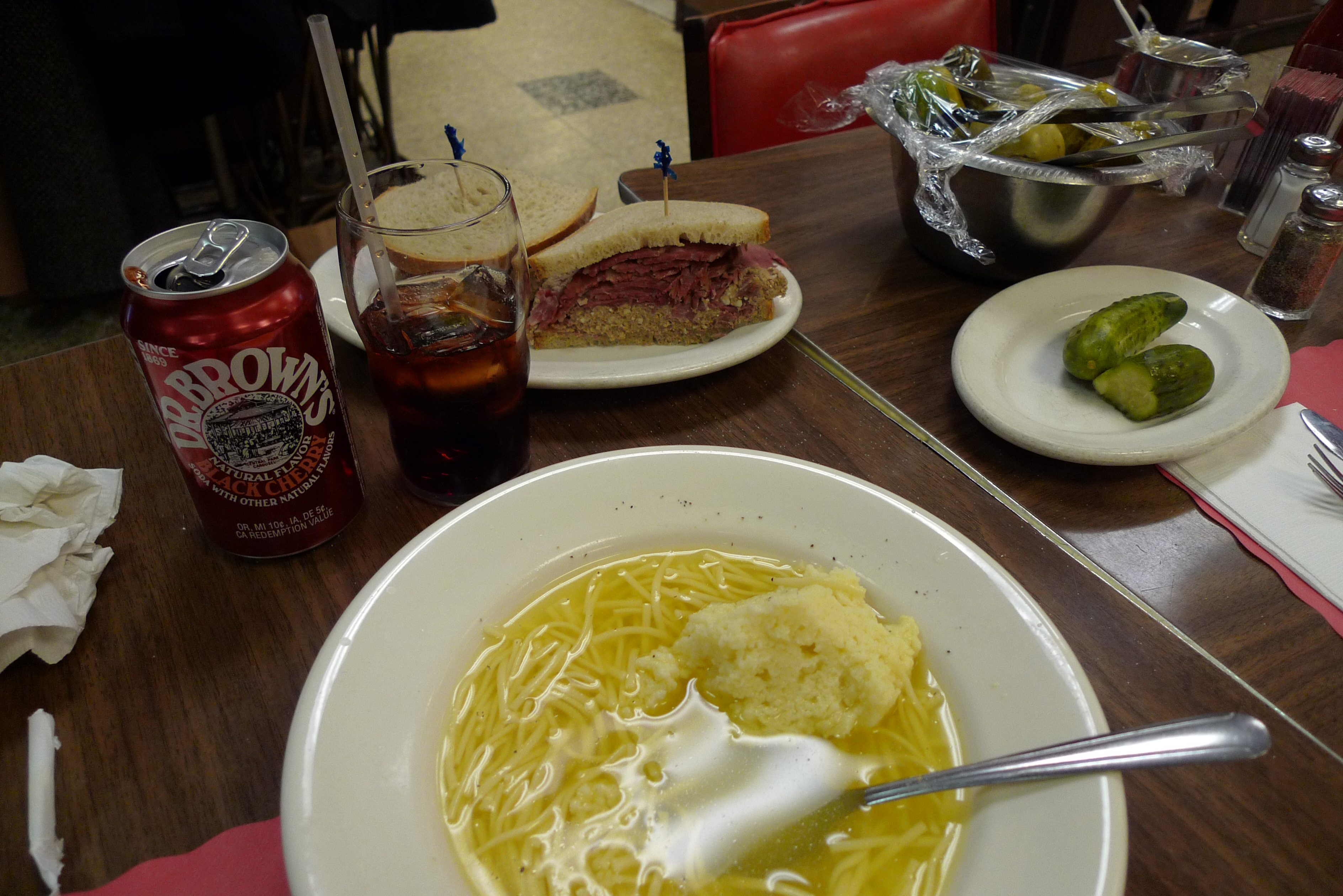 Try starting with a steaming hot bowl of chicken soup with a matzo ball, this soup did everything correctly- warming, then filling all your senses.

A light and fluffy matzo ball, perfectly cook and almost the size of a Florida grapefruit, graced the golden yellow broth, brimming with egg noodles.  It was just as flavorful as the soup my grandmother Sophia used to make. The broth, redolent with the flavor of long-cooked chicken bones, comes dotted with chicken meat and carrots.

My sandwich, large enough for two, comes brimming with chopped liver and warm, toothsome corned beef.  The sandwich was just fatty enough, but you can ask for fattier if you like.  All sandwiches come accompanied by a generous bowl of pickles and green, pickled tomatoes.

Cole slaw is crisp and the service is always with a smile from the ladies of a certain age- who have known you since the first time you wandered in, maybe several decades prior.

This is a much different room than Bragman’s.  It’s filled with judges, lawyers and local business people.

My grandfather, who owned a business in Newark, used to eat here often; Sam still remembers my family’s last name.

It’s nice to come to a place so far from where I live and have it become a new home away from home.

Pay homage to Hobby’s next time you are downtown, near the state Courthouse in Newark. Your stomach will thank you--and Sam or his sons will always remember your name. 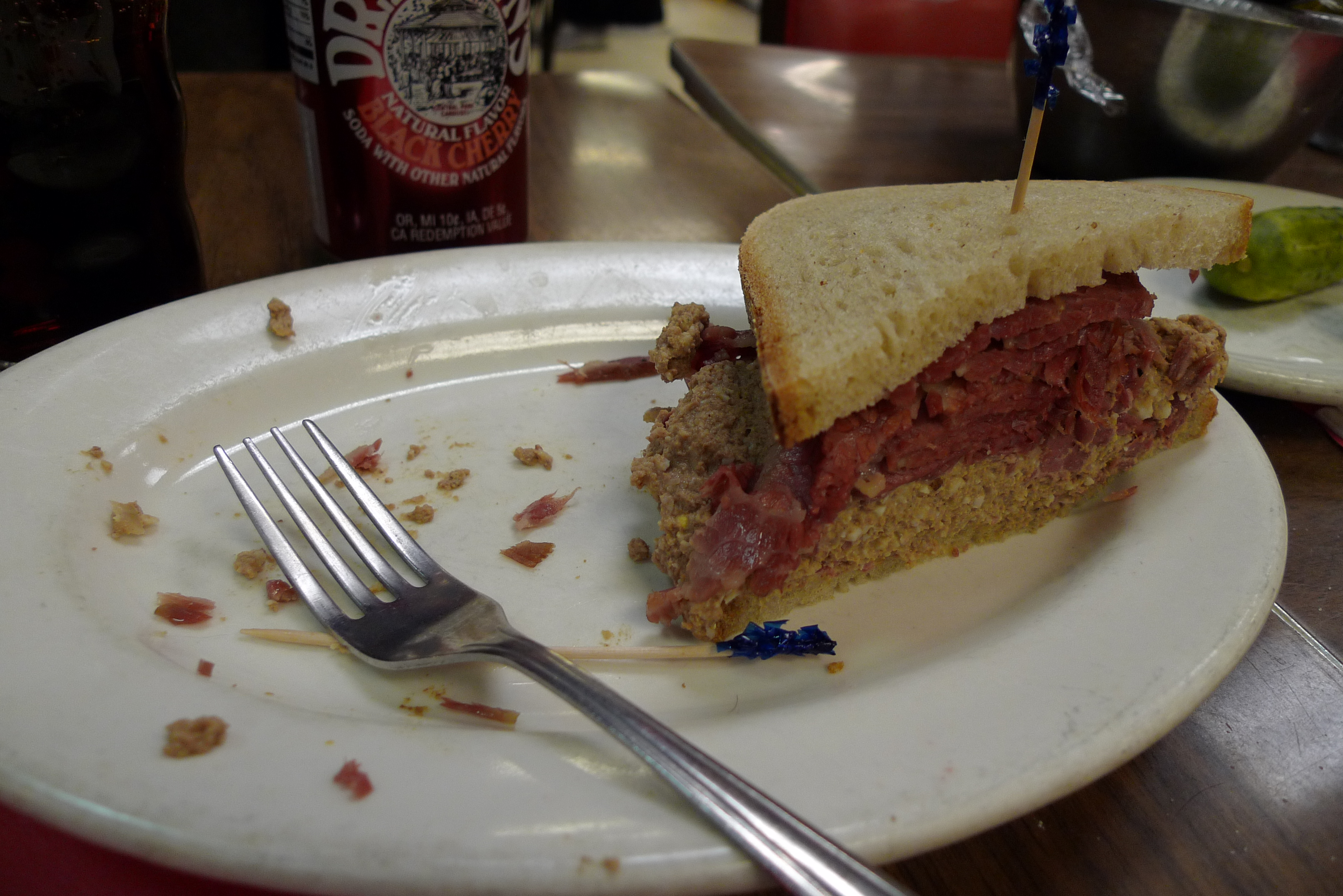 Thank you for writing Bragman's and Hobby's up.

Thank you for writing Bragman's and Hobby's up.