Internationally acclaimed French chef Jacques Pepin celebrates his 76th birthday today.  He has spent the better part of his life working in numerous restaurants in the United States and France (he even cooked for French President Charles de Gaulle), ),thirteen television shows and written more than twenty books. Pepin, along with Julia Child, introduced most of us to the joys of French food and cooking. He taught most of us about how to make a French omelet, showed us proper technique, and how to make wholesome fast food. In so many words, Pepin is a master of his field and an excellent teacher.

His most recent work is Essential Pepin produced by KQED in San Francisco. In this series, Pepin shares his favorite recipes from his sixty year career.  He has also published a cookbook of the same name that contains more than 700 recipes including the 125 recipes featured on the show.  As Anthony Bourdain puts it, "Jacques Pepin is The Master. The undisputed authority on . . . well, just about everything relating to food. If Jacques Pepin tells you this is the way to make an omelet — or to roast a chicken, then for me, the matter is settled. As with all his works, this is a vital, essential volume that should live in your kitchen forever. Nobody knows more or does it better."  I don't think I could say it better myself.

Happy Birthday Jacques Pepin from us all at Foodista!  I don't think I or any one I jdsfjfv 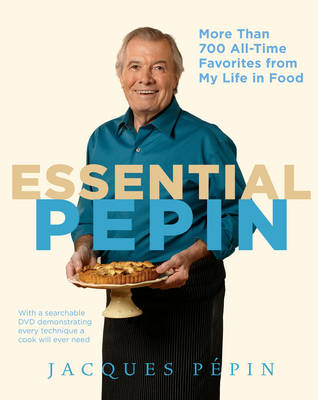 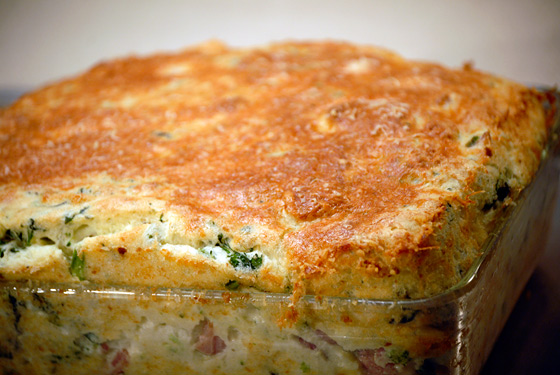 The Parmesan cheese and bread crumb crust and topping of this soufflé will be browner and crunchier when it is prepared in a gratin dish, making it easier to serve at the table. It can also be made in a conventional soufflé dish.

Leftover soufflé will reinflate when reheated in a 350-degree oven.

Preheat the oven to 375 degrees.

Wash the broccoli rabe and transfer it, still wet, to a skillet. Cook over medium-high heat for 2 minutes, or until wilted. Remove from the heat, drain well, and cool.

Mix the bread crumbs and 3 tablespoons of the Parmesan cheese together in a small bowl.

Melt the remaining 3 tablespoons pus 2 teaspoons butter in a saucepan. Add the flour, mixing with a whisk, and cook over medium-high heat for about 30 seconds. Whisk in the milk, salt, and pepper, bring to a boil, whisking constantly, and cook, whisking, until the mixture thickens. Remove from the heat and whisk in the egg yolks. Add the reserved broccoli rabe and the ham and mix well.

Beat the 5 egg whites in a large bowl until firm but still soft. Fold them into the broccoli rabe mixture, along with the remaining tablespoon of cheese.

Pour the soufflé mixture into the prepared gratin dish and sprinkle the remaining bread crumb mixture on top.

Place the dish on a cookie sheet and bake in the center of the oven for about 30 minutes, until the soufflé is set and the top is puffy and brown.

Spoon the soufflé directly from the gratin dish onto plates and serve immediately. (The soufflé can be unmolded from the dish by inverting it onto a plate, if you would prefer to present it in this way.)

An Appetizer With a Kick: Bloody Mary...
Sheri Wetherell