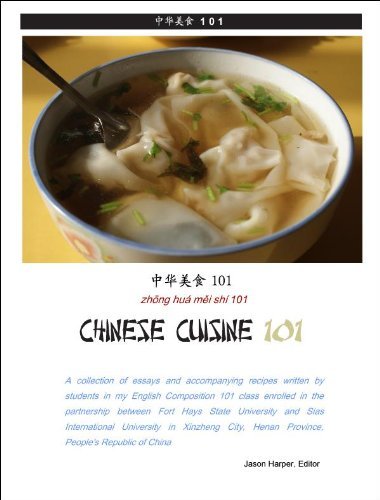 While traveling through Europe once upon a time, I met a man in Paris who said to me, “Thank God for the Chinese.  They’ve traveled across the globe and wherever they land, they open up a restaurant.  Now no matter where you go, you can always get good food.”  But what happens to the wayward western traveler landing in China?  Are we in the west as prepared for authentic Chinese cuisine as our global Chinese restaurants have prepared us?

I found the answer in an unexpected manner.  Almost anyone with a computer and an internet connection has, at some time or another, found themselves whiling away an evening or two tracing their family genealogy.  And that was precisely how I came across some long lost cousins (who probably never realized they were lost in the first place) and we have all been delighted to discover that we have a shared passion for writing, teaching and good food.  And one, it turns out, had the good sense to combine all three loves into a cookbook – and a most unusual one at that.  So disclosure: the review you are about to read is about a cousin’s cookbook, so keep that in mind and judge for yourself.

When Jason Harper went to mainland China to teach English composition for Fort Hays State University in 2007, he found himself teaching English to students who didn’t necessarily share his love of writing.  Wanting to inspire his students to write, he sought a way to reach them emotionally.  And what better way to get people inspired than to get them talking about food.  Moreover, if his students could tell him something about the foods that they ate, maybe all those bewildering Chinese dishes that were so entirely different from the dishes served at the Chinese restaurants in his home in Michigan’s Upper Peninsula, might not seem so strange.  And so it was that he gave his students the assignment to write about the dishes they most loved.  And write they did – and publish he did – with a delightful and entertaining cookbook entitled, Chinese Cuisine 101 (Blue Comet Books, Inc, 2009, 110 pp., $13.00).

The chapters are divided by food type, with chapters on Seafood; Duck and Mutton; Pork; Chicken; Soups and Stews; Dumplings and Noodles; Eggs and Tofu; Vegetables; Breads, Desserts and “Other.”  Now “Other” might be ominous when it comes to thinking about Chinese food, but rest assured you won’t find any recipes for hundred year old fermented dragon spleen or stir-fried starfish served on a bed of beach glass in Chinese Cuisine 101 (though the “Drunken Shrimp” should not be served at a PETA potluck – they are drugged on booze and eaten alive).   Recipes are as familiar as Pork with Green Peppers and as exotic as Cola Chicken, with the majority being such recognizable Chinese standards as Sweet and Sour Pork, Kung Pao Chicken, Wontons and my favorite, “Lucky Round Mass of Food.”  Each chapter features several recipes and colored photos of the prepared dishes, with enchanting essays to accompany the recipe.

Despite its intro-textbook title, however, Chinese Cuisine 101 might be better titled, Chinese Cuisine 401, because the recipes do require some confidence preparing Chinese food.  For example, recipes call for such vague ingredients as  “starchy solution,” “pork fat and gristle (size of two fists),” “one spoon sugar,” “meat broth,” “square from pig’s streaky pork,” and “edible oil” (in other words, put that motor oil back on the shelf and get yourself some peanut oil).  A glossary at the back of the book would have been helpful, even for experienced cooks of Chinese food.

And while most recipes call for ingredients commonly found in U.S. supermarkets, others require ingredients not easily found in many regions outside of China, (“prickly ash,” lotus seeds, red bean paste, “assorted fungus” or “One grass carp which has breath [is alive]” – but don’t worry if your grass carp doesn’t have breath; there are other recipes which call for dead ones).

Added to the challenge of Asian ingredients is the fact that the recipes are in metric measures.  Unfortunately, only about ninety percent of the world’s population uses metric measures, so for the rest of us hefty ten percent that means getting a kitchen scale, a metric conversion chart, and doing some math while we cook.  I don’t know about you but while I’d have no problem figuring out how to dip my (dead) grass carp in a starchy solution and garnish with prickly ash and assorted fungus, dividing by tens while my edible oil sizzles might be all it takes to send me over the edge and ordering take out.   (Fortunately, there is a conversion chart at the back of the book to provide the metrically challenged like me a useful cheat sheet.)

But while the recipes are tempting enough to be well worth tackling, the recipes aren’t really what this book is all about.  If you have an interest in Chinese food, Chinese culture, or just enjoy gentle humor and learning about the origins of good food, this is a book you will thoroughly enjoy reading cover to cover.

Harper has left the students’ essays as they were written, which is to say, filled with grammatical imperfections.  In so doing, the essays read with a charming authenticity that would have been lost to editorial sterilizing.   And the essays are what give Chinese Cuisine 101 its soul.

For example, in a recipe for Eggplant and Fish in a Clay Pot, contributor Jenny Duan Yafan tells the story of an eggplant and fish that fell deeply in love with each other.

You can guess the rest of the story.  Or can you?  It turns out that the Court of All Things in the World discovered this forbidden love and arrested the fish and the eggplant and, well, I’m afraid you’ll have to get a copy of Chinese Cuisine 101 to learn of their fate – and a delicious recipe, with tastes that the contributor describes in sizzling detail.

The rich fables and legends and cultural histories are woven throughout the book, along with interesting culinary trivia – such as sweet and sour dishes having been the food of kings and aristocrats because one of the ingredients, starch, was difficult for commoners to find.  While such comments can only be taken at face value, lacking empirical data to support them, the book offers so many curious tidbits that whether accurate or not, they provide just enough information to wet the intellect and stimulate the energetic reader to delve further into the history of Chinese cuisine.

Finally, the personal anecdotes of the students who describe lives of poverty and struggle, learning to cook, memorable family meals and celebrations, are vividly told, with recipes that at times read more like satirical tutorials than real recipes, but entice the reader to produce some tasty dishes nonetheless.  An example of one of the more memorable and comic essays accompanies a recipe for Hot Chinese Cabbage, written by Edward Meng Dehua.

After a lengthy and convincing introductory pitch for why Hot Chinese Cabbage is such a good and inexpensive meal, he writes:

“Although Hot Chinese Cabbage is popular in China, I do not like it anymore.  But I’ll introduce it to you anyway, even though it has left me with the worst feelings of my life.  Hot Chinese Cabbage is very cheap and easy to cook; therefore that was the first cooking choice of my destitute family. . .  No matter how delicious the dish was, I ate it all day, every day.  When I saw Chinese cabbage, I could not help but be scared of it . . . it was my worst nightmare.  But Hot Chinese Cabbage is really nice dish for most people (except me).”

And the recipe he provides is indeed nice; I prepared it and found it delicious indeed and not the least bit scary.

Chinese Cuisine 101 ends with a chart for metric conversions and several pages for the reader to make their own notes.  There is no index, but at 110 pages and with a detailed Table of Contents, this omission does little to detract from the usability of the book.

Jason Harper is currently at work on a second cookbook, Sichuan Cuisine 101, featuring 33 classic Sichuan recipes, interviews with restaurant chefs, and essays, observations and cultural essays.  If his first cookbook is any reflection of what is to come, it is sure to be a fascinating view into the kitchens and histories of Chinese families and cooks.